The Script, Glen Hansard and The Coronas among pack of leading Irish musicians 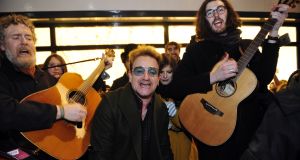 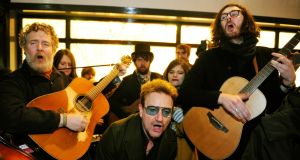 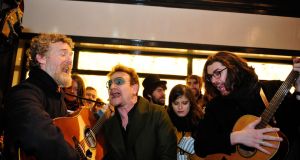 Bono, Hozier, Glen Hansard, The Script and The Coronas took to Dublin’s Grafton Street this Christmas Eve in what has become an annual busking session for some of Ireland’s biggest musicians.

A large crowd gathered to join in the sing-along outside Dunnes Stores, with many people taking to social media to post photographs and videos.

They kicked it off with Hozier’s hit song Take Me To Church, and followed it with U2’s When Love Comes To Town.

The Script streamed the event live on Periscope, with all donations going to homeless charity The Simon Community.