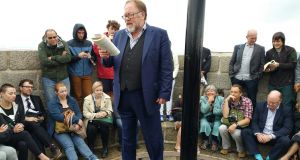 Actor Owen Roe reading from Ulysses at the top of the Joyce Tower in Sandycove Co Dublin on Thursday morning as part of Bloomsday celebrations. Photograph: Frank Miller/The Irish Times

The event in north Dublin was marked by a costumed performance by the ‘Joyceanstagers’ from chapter six of Ulysses entitled ‘Hades’ which is set in Glasnevin Cemetery.

Chapter six of the book is set in the grounds of Glasnevin Cemetery where Leopold Bloom accompanies Simon, Stephen’s father, to Paddy Dignam’s funeral. Bloom decides at this point to reject morbid thoughts and embrace ‘warm full-blooded life’.

Chief executive of the Glasnevin Trust George McCullogh described Bloomsday as “one of the most popular and festive days of the year” at the graveyard.

“When James Joyce began to set a scene for a funeral in 1904, his automatic choice was Glasnevin Cemetery, Ireland’s Necropolis,” he said. “Many of the characters from Ulysses found their final resting place here within the Cemetery walls, including Paddy Dignan, Michael Cusack (the citizen) and of course Joyce’s own father John Stanislaus.”

The performance was followed by a Joycean tour of the Cemetery, including a visit to the grave of Joyce’s father, John Stanislaus Joyce.

Elsewhere around the city there are readings, walks and bike tours taking place on Thursday to celebrate Leopold Bloom’s journey around Dublin on June 16th.

Blooming Ulysses: a one man stage adaptation of Ulysses that invites the audience to accompany Leopold Bloom on his walk around Dublin. Bewley’s Café Theatre at Powerscourt. June 13-18 1pm €8-€12 (lunch €4) bewleyscafetheatre.com

Strolling Through Ulysses: a 70-minute stage show focusing on the curious events and quirky characters of Ulysses. The International Bar, 7pm. eventbrite.ie

James Joyce Centre: Readings and performances from Joyce’s work will take place from 2pm and anyone going along is encouraged to dress up. 35 North Great George’s Street, Dublin 1

Bloomsday in Ranelagh: Events are taking place in the Dublin suburb of Ranelagh all day and include breakfasts, readings and in-depth talks.

Bike rides: Two bike tours start from the Tramyard in Dalkey at 11am and 6pm. The tour takes about 1.5 hours and costs €20.

Bloomsday at De Barra: An afternoon of readings, anecdotes and song from Ulysses with a selection of Joycean food. Clonakilty, 12.30pm