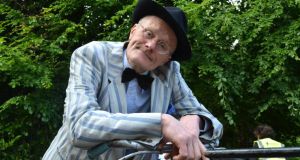 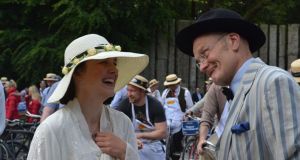 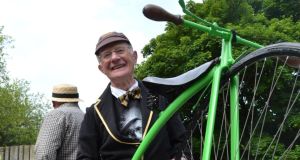 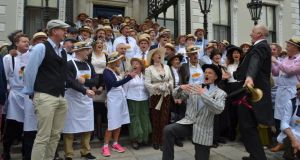 Over 150 cyclists took to the streets of Dublin on Friday dressed in full Edwardian garb and boater hats for the annual Bloomsday Bike Rally.

The cyclists set off on messenger bikes from Stephen’s Green for a tour around James Joyce’s Dublin, before stopping off at the Mansion House for a rendition of ‘Molly Malone’ with Lord Mayor Christy Burke.

After a quick pint in Kehoe’s in South Anne Street, the bike rally headed out to Sandymount to dine on a lunch of gorgonzola sandwiches.

Ciarán and Alfreda Kavanagh got married after the 2013 cycle, and hopped on their bikes on Friday morning to celebrate their anniversary.

“Sure what else would you do, on the morning of a wedding,” said Ms Kavanagh. “We had the best dressed guests ever at a wedding that day.”

Penny-farthing legend Pete Mathews has taken part in every one of the bike rallies since the annual event first began in 1993.

The bike rally has raised over € 800,000 for community and voluntary groups since it began 22 years ago, with this year’s funds going to The Musical Youth Foundation and St. Agnes Chamber Orchestra in Crumlin.

The cycle is just one of the events for the annual Bloomsday Festival, which began on Thursday and runs until June 16th in a six-day celebration of James Joyce’s novel Ulysses.

Other highlights of the literary festival include a Joycean Pub Crawl this weekend, and the 2015 Bloomsday Interview featuring British broadcaster Stephen Fry in conversation with Senator David Norris on Tuesday in O’ Reilly’s Theatre.

North Great George’s Street will be taken over by the Bizarre Bloomsday Brunch on Sunday, giving enthusiasts the opportunity to dress up in the style of the era and celebrate all things Joycean for a street feast performance.

One of the latest additions to this year’s Bloomsday programme is the Ulysses Express - a Joyce themed train that will run from Dublin city to Sandycove on June 16th.

The six-day festival will culminate on Tuesday, with a day-long ceremony of guided tours of the main locations featured in the novel such as Sweny’s Pharmacy, the Martello Tower in Sandycove and Glasnevin Cemetery.

Joyce enthusiast Anne Taylor from Belfast has been visiting the James Joyce Centre in Dublin for years, and plans to attend a conference about the writer in Trieste in July.

“If you ever go to anything about Joyce, take a good supply of hankies, because he will reduce you to tears,” said Ms Taylor. “Bloomsday is worldwide, and Dublin certainly goes to town.”

“Maybe many of the people who dress up and wear the striped blazers are not Joyce fans and are just enjoying the day out, but there are many serious Joyce scholars there too. We’re spreading Joyce and it’s amazing how many people are interested.”