Blackrock boy will be only Irish torchbearer at Rio Olympics 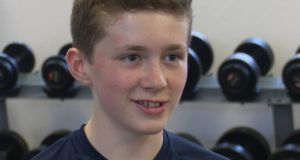 Mark O’Brien (13), from Blackrock, is to be the only Irish person to carry the Olympic torch at the opening of the games in Rio next month. File photograph: RTÉ

Mark O’Brien (13), from Blackrock, is to be the only Irish person to carry the Olympic torch at the opening of the games in Rio next month.

The representative role is a personal dream for Mark, who used it to motivate himself through a severe illness in 2012. He was involved in running before his illness.

As a result of a compromised immune system, Mark become so ill that he could not walk.

He underwent major surgery in 2014 and is now preparing to travel to Rio, run with the famous flame and eventually return to competitive running.

In a lengthy letter to the president of the Rio 2016 Organising Committee, Mark explained his dream to carry the torch and asked for a chance to achieve it.

His wish was granted and he will join a team of about 12,000 torchbearers to carry the Olympic flame across Brazil.

Blackrock Athletic Club held a fun run to support Mark in recovering from his illness in May 2015, club secretary Paul Walshe said. “It sounds like a cliche but it is a great community club and we are all so proud of Mark in his determination to overcome his illness and not giving up on his dream to carry the Olympic Torch,” he said.

Earlier this summer Mark wrote to his club: “I will be travelling to Brazil in late July where I will run with the Olympic Torch near Rio de Janeiro as it nears the end of its long journey from Athens to the Olympic opening ceremony at the Maracaná Stadium.

“I am so happy and privileged to get this opportunity and when I am there I will be thinking of everyone at Blackrock Athletic Club and all the support you gave me not only with the fun run but over the last few years.”

The torch came to Dublin in 2012 when 40 public figures carried it through the city on its way to London in a symbol of the all-island make-up of the Irish team competing in the Olympics there.