Some apartments at Frascati Hall have rotting window frames and balconies 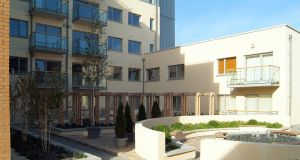 Apartment owners at a boom-era complex in south Dublin are facing bills of €25,000 each to remedy structural defects.

Some apartments at Frascati Hall in Blackrock have been found to have rotting window frames and balconies, which are causing water to come into a number of residents’ homes.

The block also had “very poor or no fire sealant” between many floors, and the management company had to take money from a sinking fund to complete remediation work for this, according to minutes of a meeting.

The 42-apartment block was built by developer McInerney Homes, which went into receivership in 2011 with debts of €113 million.

Details of the structural defects present at the block were summarised at a November 2017 egm of the Frascati Hall management company.

The minutes of this meeting, which were obtained by The Irish Times, note that opening-up works – carried out by Thorntons Chartered Surveyors – found “very poor or no sealant between floors”. It was agreed that work to fix these issues would be funded in part by the sinking fund and also by way of a levy on owners. This remedial work was completed in 2015.

However, shortly after this work was finished many owners began to notice “water ingress around windows and balcony doors”, according to the minutes.

Thorntons Surveyors once again inspected a number of apartments and found “detailing for the sills and installation of the windows was poor” and that there was “an issue with zinc cladding”.

Thorntons met the cladding manufacturer, who said the zinc cladding was not installed properly, leaving “no room behind the zinc for ventilation which results in the timber backing rotting from the inside out”. The surveyors also found an issue with some of the balconies.

“Those that comprised tiles over a wooden base were rotting and [an owner] had almost gone through onto the balcony below her,” the minutes note.

The surveyors installed a suspended aluminium plate to secure the balconies temporarily while a tender was sought for remedial work, according to the minutes.

The management company contacted all directors, the receiver and insurance company of McInerney Homes Ltd.

They also sought legal advice on who was responsible for fixing such defects. However the minutes conclude that “legal investigations undertaken to see if there was some other way of addressing these problems – without having to come to members to put their hands in their pockets – had been exhausted over a period of seven years”.

A total of 28 votes were cast by members on whether or not the remedial works should be carried out and when owners should pay for them.

However, at the time of writing, it is understood the levy has not been paid by all owners and the remedial work has not yet commenced.

The receiver for McInerney Homes did not respond to requests for comment from The Irish Times.