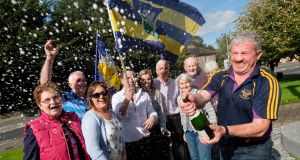 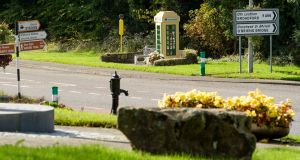 The old telephone box in Birdhill which now serves as an information kiosk. Photograph: Don Moloney

“It’s great, great,” said Michael Kelly. “Great for all the people who have done all of the hard work.”

He is one of the many people who have been volunteering with the Birdhill Tidy Towns committee for a very long time – 25 years in his case. Monday marked the high point of their work as the Co Tipperary village won the overall national prize in the Tidy Towns competition for the first time.

“We’re delighted, after all these years. It took a long while,” said his neighbour, Geraldine Bourke .

Located on the N7, which was once the main Limerick-Dublin road, Birdhill was a familiar place for motorists before it was bypassed by the M7 in 2010.

The village has blended the conservation of old buildings with the provision of new amenities such as a community park featuring a herb garden, “Ogham garden”, trees planted by local children and murals by Birdhill National School pupils and the local youth club.

The railway station on the Limerick-Ballybrophy line has flowers and a plaque erected in 2010 to commemorate its 150th anniversary.

The co-op – or “creamery” – closed in 1987 but its former premises are brightly painted and a black fountain stands in front of the bus stop. The former Garda station is currently a training centre for the Coffee Culture company and an old telephone box has a new role as an information kiosk.

Two licensed premises, Matt the Thresher and The Coopers, are opposite each other and the latter’s owner Dinny Ryan, a former Tipperary hurler and footballer, was all smiles shortly after news of Birdhill’s success spread. “We’ve been in the ball park for the last number of years . . . so it’s great to get the number one prize.”

Ms Bourke said the town was “ very lucky to have two FAS men and they’re brilliant.”

She was referring to the community employment scheme workers Paul McNamara and Michael Harrington .

In Westport, the Tidy Towns adjudicators said the “presentation and preserving” of buildings was “of major importance”. Businesses that make up the streetscape of Westport were commended for their presentation while the judges also admired the flower planting scheme. The new biodiversity plan was welcomed as were the Westport beekeepers on their success to date.

In Ennis, the flower beds were singled out for special mention, as being “really splendid”. The judges said it was “a pleasure” to visit the town on the week preceding the fleadh competition.

The judges said the town was “bustling” with many shoppers moving through the bright and colourful narrow streets. On Abbey Street, the Beleek Wollen Shop building was admired. The bridge over the river with exquisite hanging baskets was commended and the 1916 commemoration with excellent landscaping was noted. Cruises Bar was praised for its well painted bright facade.

In Clonakilty the judges arrived as Tidy Towns volunteers were out in large numbers engaged in “tremendous works”, particularly around Emmet Square.

The judges said “50 volunteers with a further 50 junior volunteers are mighty numbers by any standard”.

They congratulated the Clonakilty committee for the consistent achievement of a gold medal since 2004.