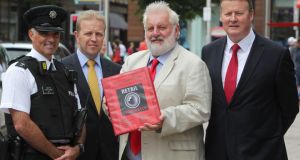 Belfast traders and the PSNI have devised a new ‘hot alert’ scheme to try to deal with “serial and professional” shoplifters who are costing businesses millions of pounds each year.

Photographs of Belfast’s 30 most prolific shoplifters are to be sent to city-centre retailers in an effort to reduce thefts.

This is the second scheme to tackle shoplifters in Belfast in recent years. It is now the only city in Britain and Northern Ireland where shoplifting, estimated to be costing UK traders £2.2 billion (€2.5 billion) annually, is falling, according to Andrew Irvine, Belfast city centre manager.

He said information about the anti-theft schemes was being shared with retailers in Dublin, where shoplifting is a major source of crime, and with other cities. Retail industry figures in the Republic say the cost of shoplifted goods is more than €500 million annually.

The PSNI said the top 30 offenders are responsible for 80 per cent of all Belfast city-centre shoplifting. They all have multiple convictions for theft.

Almost 70 city-centre traders will receive the photographs and will alert their own security teams when the shoplifters come into the city.

“It works so easily,” said Billy McGivern, chairman of Belfast City Centre Management. “When a retailer sees one of these offenders, they report the offender to Musgrave [police] CCTV room who will contact the city centre policing team.

“A police officer from this team will then take appropriate action.

“We are confident that this fast response will deter potential offenders from visiting Belfast city centre with the intent to commit crime,” he added.

He said a separate scheme has already reduced shoplifting by half. Under this system shoplifters who are caught, rather than face prosecution, can opt to join the “retail crime-watch scheme” where they agree not to go into the 70 stores in the project for up to 12 months.

Mr Irvine said 3,000 shoplifters had participated in this scheme so far. “It is a sharp shock to the system and these people tend not to shoplift again.” It was now planned to extend that scheme to Newry and Derry with support from the North’s Department of Justice.