Band of brothers: One family’s story of the first World War 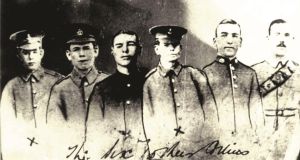 I’ve never watched Saving Private Ryan. An aversion to violence, bloodshed and the sad inevitability of war films means I haven’t seen the epic 27-minute opening scene, where Tom Hanks and his comrades face the carnage of the Normandy landings. Besides, the plot has always seemed a bit far-fetched. A family of boys wiped out by war; an army that was only too happy to send its sons to slaughter suddenly pulling out all the stops to save the last remaining brother.

Then earlier this year while talking to my father, I learned that not only was such a story entirely plausible, it had played out in our family.

My great-grandfather, William Collins, was one of six Irish brothers who fought in the first World War. Of the six sons that Agnes and Thomas Collins, from Waterford city, saw off to Europe, William was the only one to make it home safely. Four of his brothers died in Flanders and at the Somme, while the fifth was missing, presumed dead until he was found badly injured and was repatriated after the war ended.

Uncovering the Collins brothers’ story has been a long process for William’s son, my granduncle Jimmy. While the family always knew of the brothers’ deaths, details were scant and where they lay in Europe was unknown.

“I’ve been interested in looking into it since I was in the army myself,” Jimmy says. “So I started going through some war paraphernalia found in the old family home; papers and medals.”

With little information, and his father’s generation all gone, Jimmy’s search moved slowly, picked up and dropped for years until one discovery changed his fortunes. “I found my father’s Soldier’s Small Book.” This battered leather-bound notebook (see panel) was given to William Collins after he enlisted in the 8th King’s Royal Irish Hussars, a cavalry regiment stationed in India, in 1909.

Inside the back cover, in spidery, faded writing, was a short list of soldier numbers, initials and causes of death – “gassed”, “missing”, “cavalry”. It was enough for Jimmy and his daughter Anne to start a search with the ministry of defence and Public Records Office in the UK. Some 70 per cent of service documents of soldiers who served in the first World War were destroyed during air raids on London in 1940, making it difficult to trace those killed in battle. For Irish families, finding this information can be even harder. Soldiers returned from the war to a changed Ireland, one where it was easier – and safer – to forget their time fighting for the British. Most soldiers never spoke about their time in the trenches, and their stories died with them.

William’s recollections to his children were limited to anecdotes, such as one about his war horse, Stanford, who he had won in a dice game at Abbeville. “He never spoke of the death and destruction,” Jimmy says. “He never spoke of friends from the war.”

In recent years, the digitisation of surviving archive material and organisations such as the Commonwealth War Graves Commission (cwgc.org) have helped families track their ancestors, although thousands of records have yet to be made available online. The information gleaned from these sources was enough to enable Jimmy, along with my father Pat, and his cousins, David and Billy Collins, to visit the war memorials of the four brothers at the Somme and Flanders Fields last month.While the two eldest Collins brothers, Patrick and William, were career soldiers, the four younger brothers signed up once war broke out in 1914. “They had no idea what they were getting into,” Jimmy says. “They were told they’d be home by Christmas . . . that it was a good way to get work and to see the world. They never knew there’d be four years of it.”

The first to fall was Stephen, who was only 16 at the time of his death – one of an estimated 250,000 underage boys who fought in the war. It’s unclear whether Stephen lied about his age or the recruiting officer turned a blind eye to the army’s age limit of 19 for serving overseas.

Whatever the circumstance, less than a month after the outbreak of war, Stephen was deployed to France as a private with the 2nd Battalion of the Royal Irish Regiment. Just two months later he died in Flanders on October 19th, 1914, and is commemorated on the Le Touret War Memorial in Pas-de-Calais in France.

Michael joined the same battalion of the Royal Irish Regiment, and was deployed to the Western Front. He fell in May 1915 at the beginning of an offensive at Aubers Ridge in Flanders, aged 24. An ammunitions shortage and problems with trench layout and communications contributed to a disastrous result for the allies – 11,000 men were lost in one day, including Michael, whose body was never recovered. He is commemorated in Ypres, on the Menin Gate Memorial.

The Battle of the Somme, which saw more than one million allied soldiers injured or killed, claimed the next brother, John. He was 22 and a private with the 1st Battalion of the Royal Munster Fusiliers when he died near Thiepval, in Belgium on September 9th, 1916. He is commemorated on the Thiepval Memorial to the Missing of the Somme in France.

Joseph Christopher (Christy) was badly injured on the eastern front in Salonika – an exploding shell lodged large amounts of shrapnel in his body. A telegram was sent home to inform Agnes he was missing, presumed dead. However, after a period in a convent, the details of which remain hazy, he was repatriated to Waterford after the war, to the surprise of his family. His shrapnel injuries never fully healed, and he was in pain for the rest of his life

The eldest son, and last to die in the war, Patrick was aged 30 and a 2nd corporal in the 173rd Tunnelling Company of the Royal Engineers when he was killed on March 29th, 1918. Having survived nearly four years of war, Patrick died just before the allies’ Advance to Victory. As with his brothers, his grave is unknown but he is commemorated on the Pozieres Memorial in the Somme.

Following Patrick’s death, William was released on compassionate grounds. There was no Saving Private Ryan movie- star rescue, no fanfare to welcome him home. In the nine years since he had enlisted, Ireland had changed dramatically and support for Irish men fighting with the British army had waned.

He arrived home to a mother who had lost four – though she still believed five – of her sons. She had been abandoned by the boys’ father midway through the war, left alone to raise the two youngest boys, Richard and Thomas.

It’s impossible now to imagine how difficult times must have been for the family, but compassion, it seems, had an expiration date. William was recalled to fight in the dying days of the war.

Visiting the memorials was surprisingly emotional, Pat and Jimmy say. At the In Flanders Field Museum, “there were videoed re-enactments showing men running through the mud, saying ‘Today wasn’t too bad, we only had 1,100 casualties’,” says Pat, “or another of a nurse talking about soldiers who were in so much pain they would try to shoot themselves. If they failed, they would be nursed back to health until they were well enough to face the firing squad.

“It boggles the mind,” Jimmy says. “You can’t imagine the thousands of men . . . You can talk about statistics and figures all you like, but there are hundreds of photographs [at the Missing of the Somme in Thiepval] that families sent over. There was always a fervent hope they might have some information. It’s very emotional.”

William Collins left the army in 1919, after serving nine years and 362 days. Work for a former British soldier wasn’t easy to find in Waterford, and he spent most of his working life in London, after marrying a Waterford woman and having six sons and a daughter of his own.

One wonders how he must have felt, just 20 years later, to watch his own boys heading off to the battlefields to face the horrors of war again.