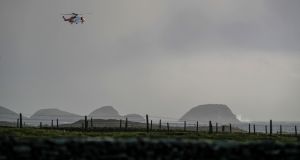 An Irish coastguard helicopter near to Blacksod Lighthouse, Co Mayo where the search continues for debris from Rescue 116. Photograph: Peter Byrne/PA Wire

Bad weather is hampering the search for the Rescue 116 helicopter flight recorder in Atlantic waters close to the Blackrock lighthouse, 13 km west of the north Mayo coast.

Strong to gale force west to south-west winds are forecast for the next two days in the Blacksod Bay area,and there is already a poor visibility and heavy swell around Blackrock - close to the last known position of the Irish Coast Guard helicopter early on Tuesday morning.

Items from the helicopter have been retrieved from the shore as far north as Annagh Head.

Belmullet Garda Supt Tony Healy has urged members of the public who find any items relating to the search to notify the Garda of the location immediately.

“We would stress that items should not be moved if possible before we can retrieve them and confirm the location,” Supt Healy said.

He added the two investigations into the crash - by the Air Accident Investigation Unit and the Garda - were still at an “early stage”.

Capt Fitzpatrick’s funeral is taking place in Dublin on Saturday, and her body is reposing at her home today.

Relatives of the missing men who travelled to the north Mayo area early this week are being briefed by Garda and Irish Coast Guard liaison and offered support, including food and accommodation, by the local community.

The weather is due to moderate on Sunday evening, and Irish Coast Guard teams are hopeful that conditions early next week will make an approach possible, using a remotely operated vehicle (ROV) deployed from the Irish Lights ship Granuaile.

The LE Eithne is remaining in Blacksod Bay as on-scene co-ordinator, and the RNLI Achill and Ballyglass lifeboats have been continuing the sweeps of the area they have been conducting all week.

The Air Corps Casa fishery protection plane is also continuing to survey the sea area, and an AW139 helicopter is on standby to assist the Air Accident Investigation Unit (AAIU).

The AAIU found “significant”pieces of the helicopter close to the lighthouse on a high plateau on Thursday evening,but has said there is no sign of any surface damage due to impact on the rock or markings on the lighthouse which is 83metres above sea level.

Irish Coast Guard volunteers from a number of counties are participating in low tide shore searches, co-ordinated by the Ballyglass unit, but conditions are difficult with heavy rain and winds.

Off-duty and former Irish Coast Guard flying crew have also travelled to the north Mayo area, as have RNLI and Civil Defence volunteers.

St Patricks’s Day parades in Belmullet , Bangor Erris and Eachléím, close to Blacksod, were cancelled as a mark of respect, and Mayo Civil Defence and Fire Service teams were withdrawn from parades in other parts of the county to assist in the search.

The Irish Coast Guard says it has been overwhelmed by the messages of sympathy and offers of support from members of the public.

A minute’s silence was held for the air crew at a number of St Patrick’s parades, including Waterford, where Capt Fitzpatrick was formerly based, and Wexford.

Bishop of Limerick Brendan Leahy remembered the “heroism and mission” of Capt Fitzpatrick and her colleagues in his St Patrick’s Day mass for the Defence Forces.

Bishop Leahy said they “had displayed the message of St Patrick in how they sacrificed so much and dedicated their lives so fearlessly to others”.