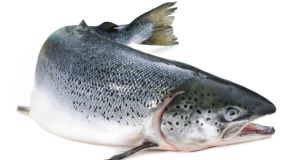 A quantity of farmed salmon carcasses was found in the vicinity of Spiddal beach last week, according to the lobby group Galway Bay Against Salmon Cages (GBASC).

It claimed that Galway Bay could now be “infected” with viruses associated with farmed fish, as the dumping occurred at a time when salmon smolts are migrating to sea from local rivers.

It said that a tag found on one of the dead fish carried the Marine Harvest Ireland label.

However, Marine Harvest Ireland said that it had no involvement in the alleged dumping, and urged the individual who is said to have witnessed the activity to contact the gardaí and/or Galway County Council as a matter of urgency.

It also said there were no instances of pancreas disease on its sites currently.

GBASC spokesman Brian Curran said that his group had first been notified of “illegal dumping” on April 28th by a member of the public, but carcasses had been washed away by tides when he went to investigate.

This most recent incident was notified to him on May 21st by a local fisherman, who was “extremely concerned” about the possible detrimental effect on wild fish species in Galway Bay.

“Inshore fishermen are prohibited from using farm salmon carcasses in their lobster/crab pots as bait by regulation due to the dangers of disease transfer,” Mr Curran said.

He said that he found a large amount of carcasses that evening, along with blue plastic wrapping and a plastic label tracing a fish to a Marine Harvest farm.

1 Cab investigates behind the massive gates of Chosen Few Motorcycle Club in Dublin
2 Love in a time of Covid: John and Mary marry over 40 years after first meeting
3 Big Phil is being very big about his former boss’s Covid quarantine trip
4 Sinn Féin’s stand on Covid is facing increasing questions from political rivals
5 Two hundred Irish retailers for all your online Christmas shopping
Real news has value SUBSCRIBE