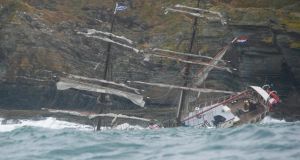 The Marine Casualty Investigation Board (MCIB) has confirmed that the Dutch-registered sail training ship Astrid, which ran aground off the Cork coast a year ago, had experienced engine failure.

Some 30 people – 24 Irish and European trainees and six permanent crew – were rescued from the 42-metre ship when it ran up on rocks on a lee shore en route from Oysterhaven to Kinsale, Co Cork, on July 24th last year.

The vessel, built in 1918 and operated as a cargo ship until 1975, was on a 14-day voyage as part of an EU Youth in Action programme sailing from Southampton to Cherbourg via Kinsale.

It says the brig-rigged ship anchored in Oysterhaven on the afternoon of July 23rd, with a master and permanent crew of three, a temporary cook, a mentor and 24 trainees aged between 15 and 24 on board.

The ship left with a flotilla, organised with the Irish Sailing Association as part of The Gathering tourism initiative, on July 24th.

The MCIB says the final report will be published after the normal “natural justice” procedure.