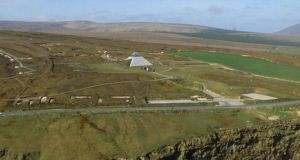 Céide Fields: Dr Whitefield contends that the low, straight heaps of stone are “indicative of the land having been cleared for ploughing”

The archaeologist who linked north Mayo’s Céide Fields complex to some of Europe’s earliest farmers has said he feels he has been subjected to a “silent ambush” over his life’s work.

Seamus Caulfield was responding to new research by NUI Galway archaeologist Andrew Whitefield which suggests the field complex may be 2,500 years younger than previously thought.

The complex once described as the “oldest enclosed landscape in Europe” may actually date from the later Bronze or Iron Age rather than from the late Stone Age, according to Dr Whitefield’s study published in the European Journal of Archaeology.

Dr Whitefield outlined his thesis at a public lecture in Galway’s Town Hall Theatre on Friday and was then exposed to intense questioning by Prof Caulfield and colleagues at the event.

Afterwards, Prof Caulfield distributed a statement in which he expressed his “disappointment and sadness” at what he described as a “silent ambush of my life’s work by people I considered closer than colleagues”.

Prof Caulfield, retired professor of archaeology at University College Dublin (UCD) noted it was 50 years ago this year that he and the late Prof Michael Herity collaborated on a study of structures under blanket bog in Mayo and elsewhere.

He led a team which located stone walled fields, houses and megalithic tombs. His work on Neolithic farmers attracted a helicopter visit to Erris by then taoiseach Charles J Haughey, and eventual funding for a Céide Fields visitor centre.

However, Dr Whitefield’s recent PhD research has led him to question the dating. His paper contends that the dated organic materials recovered from the slopes of Céide hill have an “uncertain relationship” with the stone boundaries, and were not found within the boundary structures.

Prof Caulfield has described Dr Whitefield’s paper as “error-strewn”, and called on him to make the relevant chapter in his PhD thesis publicly available.

He said Dr Whitefield was relying on pollen dating for the wall construction, and that this technique had been “discredited”. He called on palaeobotanists cited in the new research to “revisit their findings”.

Prof Caulfield told The Irish Times that he would be analysing the paper in greater detail shortly and would publish this on his website.

Dr Whitefield contends that the low, straight heaps of stone are “indicative of the land having been cleared for ploughing”, and there is no evidence of boundaries for livestock management as had been previously suggested.

He says the complex is still incredibly significant in international terms, but that it is more likely to be a “textbook example of the wider European tradition of ‘Celtic’ fields” – ranging in date from the later Bronze Age (about 1,500 BC) to the end of the 4th century AD.

Dr Whitefield’s dating has also been criticised by associate professor Graeme Warren, head of UCD’s School of Archaeology, who collaborated with Prof Caulfield on Heritage Council-funded work on prehistoric sites.

Prof Warren said Dr Whitefield’s evidence for Bronze Age origins was insufficient, and said he had omitted several key pieces of research and failed to place the Céide fields in the context of other Neolithic sites in the area.

Dr Whitefield said on Friday he stood over his research, which was published in a prestigious adacemic journal. He said he had enormous regard for Prof Caulfield’s work which had placed the west of Ireland in the vanguard of Europe’s earliest agricultural practices.