Aran islands could be carbon neutral by 2022 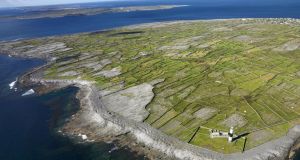 Improved insulation and efficient heating systems have cut energy bills by about €250,000 annually

Three offshore islands are outstripping the mainland in their drive to become carbon neutral by 2020.

A pilot project involving use of electric cars and building upgrades indicates that fossil fuel dependence on the Aran islands could be cut by 84 per cent, community leaders told Minister for Energy Alex White on Inis Mór.

This could provide a national and international template for self-sufficiency, Mr White acknowledged, when he paid tribute to the “leadership and inspiration” provided by islanders themselves.

Mr White, who travelled by ferry to Inis Mór from Doolin, Co Clare, was invited out by Comharchumann Fuinnimh Oileáin Árann Teo, a dedicated energy co-op serving all three islands.

The limestone landscape, which is pounded by some of the most energetic waves and wind systems in the northeast Atlantic, was identified as a potential renewable energy hub several years ago.

The co-op, chaired by Dara Ó Maoildhia, teamed up with SEAI to run a number of pilot projects, involving electric cars and retrofitting homes and buildings with insulation.

SEAI was able to take an “energy snapshot”, using data provided by the Department of the Gaeltacht and the island co-ops, and found that the annual bill for energy in 2008 was €1.2 million.

Some 63 per cent of the islands’ buildings have been upgraded with improved insulation, and efficient heating systems. This has cut energy bills by about €250,000 annually, or about 23 per cent of the total.

Electric vehicles have reduced reliance on imported energy for transport by 68 per cent, and analysis shows that this could be further cut by replacing heating systems with heat pumps powered by wind or wave energy.

SEAI official Graham Brennan said if the island had access to 1.8 megawatts of wind energy, it would be almost entirely self sufficient.

Sally Flaherty, who tested one of the E-city Mega electric cars, said she “loved it” for its “nippiness”, and its “lack of fuel and fumes”. She was among about 30 drivers who participated in the project, and the E-city vehicles may now be replaced by three Renault electric vehicles – one of which transported the Minister yesterday.

The Aran energy co-op is run by volunteers, and is committed to ensuring that there is stakeholder involvement. It is affiliated to Energy Co-operatives Ireland (ECI), which also has co-ops in Mayo, Longford, Dublin and Kerry.

ECI chief executive Cormac Walsh and Mr Ó Maoildhia stressed that such energy co-ops created jobs, while empowering communities to take control of their own energy use.

Aran craft beer, seaweed and vegetables are among the industries which could be developed in tandem with sustainable energy development, Mr Ó Maoildhia said. The island co-op is examining the feasibility of wind turbines, if an agreed location can be found.

Mr Ó Maoildhia said the community needed a “strong partnership” with the Government, SEAI and other agencies to realise its ambition, and “positive supports” for energy projects such as solar photovoltaic and heat pump installtion.

Mr White said community engagement would be a key theme of the White Paper on Energy, due for publication in the autumn.

He said he would fight for increased support in the budget and in the capital programme for increased grant-aid for home and public building energy efficiency projects.