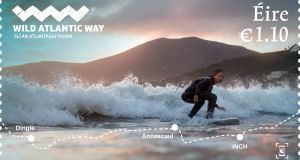 One of An Post’s new set of stamps featuring images of some of Ireland’s most scenic views.

An Post has released a new set of stamps featuring images of some of Ireland’s most scenic views.

All of the stamps depict discovery points along the Wild Atlantic Way and were developed in conjunction with the tourism project.

The four new stamps were designed by Red & Grey Design, which is based in Portobello, Dublin.

According to An Post, the new stamps contain a new twist, as each “features augmented reality technology and, when scanned using a smartphone or tablet with the CEE App installed, allows the user to access additional material on the Wild Atlantic Way”.

The set includes two domestic and two international stamps, costing 72c and €1.10 respectively, and will be available for a year.

An Post said they have been “an enthusiastic supporter of the Wild Atlantic project”.

In May, it helped launch the Wild Atlantic Way passport, which provides visitors with a record of their journey on the route.