A public park for Dublin’s Liberties within reach for locals

Bridgefoot Park is what locals hope will become of the slab of tarmac and scrubland on Bridgefoot Street in Dublin 8. It would go some way to addressing the acute shortage of green space within the Liberties. 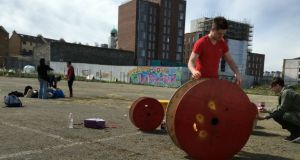 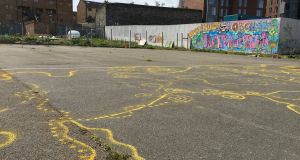 A vacant site at Bridgefoot Street, Dublin 8, which locals hope to turn into a park. Photograph: Dan Griffin 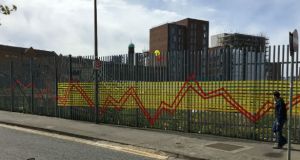 Site at Bridgefoot Street, Dublin 8, which locals hope to turn into a park. Photograph: Dan Griffin 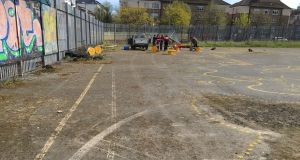 The steel gates on the fence surrounding a large derelict site in Dublin’s south inner city will be unlocked today as a community campaign to open a public park in the Liberties starts to bear fruit.

Bridgefoot Park is what locals hope will become of the slab of tarmac and scrubland - vestiges of a 1960s apartment complex that was pulled down in 2003 - on Bridgefoot Street in Dublin 8.

A public private partnership deal would have seen the empty site used for about 200 apartments and a community centre but the economic crash scotched those plans.

A community garden, complete with chickens, ended up occupying the area instead but in recent years a more ambitious plan has taken shape, one that would go some way to addressing the acute shortage of green space within the Liberties.

“You want development because we need houses, and we need a lot of public housing,” says local People Before Profit councillor Tina McVeigh. “But what we need as well is to have a city and a neighbourhood that people want to live in, that communities can develop in. An integral element to that is green space and places for children to come out and play.”

Dublin City Council, which controls the 2.5 acre site, supports the idea of turning it into a park and has agreed to fund a design consultation process with local residents, businesses and other interested parties with workshops scheduled to begin on May 4th.

UCD school of landscape architecture students were yesterday preparing the site for two “pop-up” open days which will take place this evening at 5pm and tomorrow afternoon from 12pm to 2pm.

“The idea is that you open the site to the community so they can have a look at it,” says lecturer Sophie von Maltzan. “Then in the next four weeks there will be community consultations for developing a design for a park on this site with a landscape architect.”

For the Bridgefoot Park campaign group, which has been holding meetings for the past 18 months or so, this is all progress.

“We all have different stories of why we want this park,” says local resident Zoe Healy. “My story is that my seven-year-old son Daniel picked up syringes in February and I just can’t take any more. Something has to be done about this area.”

She adds that local children need proper parks and community facilities because they have very little else to do in the area.

McVeigh says councillors will vote at the end of May on a city development plan motion to rezone the land at Bridgefoot Street from mixed development to Z9, which is purely for recreational and green space. All going to plan, she says, work on the new park should get underway sometime in 2017.Bridgefoot Street Park Facebook page