1916 martyr Sean Hurley to be honoured in west Cork 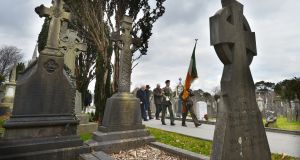 Sean Hurley was buried along with 20 other casualties of the Easter Rising in a mass grave in Glasnevin Cemetery in Dublin. Photograph: Alan Betson / The Irish Times

Over 100 relatives of the only Cork volunteer to die in the 1916 Easter Rising in Dublin will gather at his birthplace in west Cork this weekend to remember his part in the fight for Irish freedom.

Sean Hurley (29)from Drinagh near Dunmanway was fatally wounded 100 years ago today on April 29th 1916 while fighting with the Four Courts garrison under Commandant Ned Daly.

Hurley was a member of a party involved in some of the heaviest fighting of the Rising, spending the week defending Church Street to the rear of the Four Courts from repeated British attacks.

On April 29th shortly before the rebels’ surrender, he received a gunshot wound to the head and arm and was taken to Fr Matthew Hall for medical hall where he was anointed before he died.

On Sunday, over 100 descendants of Sean Hurley will gather with hundreds of locals from Drinagh and beyond to attend a commemorative event in the village to remember his sacrifice.

David Hurley, a grand nephew of Sean Hurley, said the event will be attended by relatives from as far away as the United States who were anxious to honour their ancestor for his part in the 1916 Rising.

“Sean’s eldest brother, William, went to America in the early 1900s and some of his descendants have come over to attend Sunday’s events and will meet cousins they have never met before.

“It’s a big event for the Hurley family and for Drinagh to remember the only Cork volunteer to die in Easter Week in Dublin. As a family we are hugely proud of the sacrifice that Sean made.

“And it’s great for Drinagh that the part played by a local man in the Easter Rising and the events leading to the foundation of the Irish State is now being remembered 100 years on.”

Sean Hurley was a close friend of Michael Collins, having attended primary school in Clonakilty with Collins and another local Irish Volunteer, Con O’Donovan, who also fought in the Four Courts in 1916.

Mr Hurley explained that his granduncle and Collins remained close friends when they were in London and they both returned to Dublin in early 1916 to take part in the planned rebellion.

“Conscription was being introduced and they didn’t want to die fighting for the British in the trenches so they returned to Dublin to take part in the Easter Rising together,” he said.

Sean Hurley was buried along with 20 other casualties of the Easter Rising in a mass grave in Glasnevin Cemetery which forced the Hurleys to abandon plans to have him re-interred in Drinagh.

“It would have involved too much a disturbance but now there’s a headstone with his name over the plot while his name now appears on all the new monuments to those who died in Easter 1916.

“We probably know more about him now than in 1916 with so many records being digitised. He had been forgotten but now he is being remembered again and as a family, we are very proud.”

Cork historian of the Irish Volunteers Gerry White will deliver the oration at Sunday’s ceremony while a statue of Sean Hurley by sculptor, Don Cronin will be unveiled later in the summer.

Other events include a discussion Saturday night on “A Decade of Centenaries - The Right to Remember” chaired by Sean Hurley’s great grandniece, Jacqui Hurley of RTÉ Sport.

For further information on the weekend events in Drinagh, please visit www.seanhurley1916.com

Man found guilty of murder of Ciara Glennon and second woman in 1990s 22:00
Traffic figures for Dublin ‘slightly down’ on pre-Level 3 restrictions 21:52
No deadline set for restoration of Shelbourne Four statues 21:44
People leaving Catholic church because they are tired of ‘little old men’ - McAleese 21:44
Representatives of hospitality sector in Donegal claim ‘total panic’ 21:43

1 Donegal to move to Level 3 Covid-19 restrictions, Taoiseach confirms
2 Covid-19: Three more deaths and 324 new cases in State as ‘green list’ of countries reduced
3 Covid-19 Q&A: How are we doing now and is there any good news?
4 Coveney to visit US next week amid heightened concerns over Brexit
5 Man found guilty of murder of Ciara Glennon and second woman in 1990s
Real news has value SUBSCRIBE