Captain Peter Kelleher from the 27th Infantry Battalion reading the Proclamation at the GPO as part of the 1916 Rising celebrations. Video: RTE 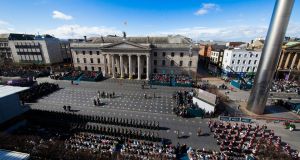 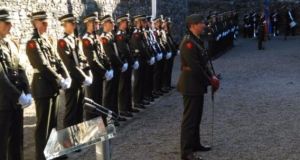 The commemorations began with a tribute in the Stone Breakers’ yard in Kilmainham Gaol where President Higgins will lay a wreath on the spot where 15 of the rebels were executed in the days after the Rising. Photograph: Defence Forces/Twitter President Higgins lays a wreath in the Stone Breakers’ yard in Kilmainham Gaol where rebels were executed in 1916. Photograph: Eric Luke / The Irish Times 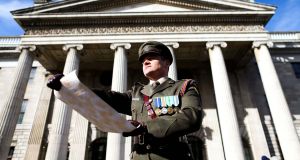 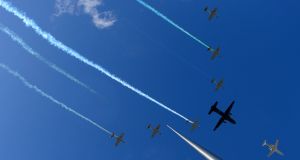 Tens of thousands of people lined the streets of Dublin on Sunday to witness a large military parade commemorating the centenary of the 1916 Easter Rising.

Crowds of people gathered along the 4.5km route across Dublin from 10am for the parade.

At about noon, the Proclamation was read out at the GPO on O’Connell Street by Capt Peter Kelleher .

President Michael D Higgins then laid wreath at the GPO, with relatives of those who fought in the rebellion in attendance.

The flag above the GPO was then raised to full mast and Amhrán na bhFiann was played as a fly-over of military planes took place 700ft above O’Connell Street.

Ahead of the reading, the flag over the GPO had been lowered to half-mast and the President inspected a guard of honour.

Head Chaplain of the Defence Forces Fr Seamus Madigan lead a specially-composed prayer for “ all who lost their lives in 1916 and throughout the troubled history of our island.”

Some 3,722 Defence Forces personnel marched in front of military vehicles along with emergency services personnel and army veterans, many of whom served on United Nations’ peacekeeping missions.

The parade ended shortly after 2pm.

President Higgins earlier laid a wreath in the Stone Breakers’ yard in Kilmainham Gaol on the spot where 14 rebels were executed in the days after the 1916 Easter Rising. The ceremony was the first of the main commemorative events of the day in Dublin.

The Acting Taoiseach, Acting Tánaiste and Ministers for Defence and Justice stood to attention as the tricolour flapped at half-mast, casting a shadow across the high wall where the leaders of the Rising were shot by firing squad in 1916.

Representatives of the main political parties, including Fianna Fáil’s Micheál Martin and Sinn Féin’s Martin McGuinness, along with senior officers of the Defence Forces and descendants of the executed leaders, stood quietly along the opposite wall to pay their respects.

“In this place of final moments, we are reminded of the comfort brought by faith to the leaders of the 1916 Rising,” Fr Madigan, told those present. “We remember, reflect and re-imagine our belief in life after love. We recall the love and devotion of the executed leaders - for family, for country and for God.”

The President stepped forward to lay the wreath, followed by a minutes’ silence, which seemed particularly profound in this, the most evocative historical location of the Rising.

Fourteen men died on this spot between May 3rd and May 12th, 1916. The first was Patrick Pearse; the last the wounded James Connolly who was tied to a chair before being shot.

The commemorations began on Saturday morning when Sabina Higgins lays a wreath at the grave of Countess Constance Markievicz in Glasnevin Cemetery.

Following that, the President laid a wreath in the Garden of Remembrance in honour of all those who fought and died for Ireland’s freedom.

As well as Kilmainham and the GPO, wreaths were also laid in Glasnevin on Sunday.

One was placed at the Sigerson Monument, which honours the dead of 1916, and others at the graves of Edward Hollywood, a silk weaver from the Liberties in Dublin who put together the Irish Tricolour in 1848, and the grave of Peadar Kearney, who wrote the lyrics to Amhrán na bhFiann.

Mr Kearney’s grandchildren Peader, Eva, Brid and Pearse were present for the event.

At Glasnevin, Minister for Arts Heather Humphreys said today was a moment for reflection. Ms Humphreys said the Rising was inspired by a vision for a better Ireland of equal rights and opportunity.

It was a sincere quest for independence in spite of the consequences, she said.

The Minister questioned what Mr Hollywood would think if he knew the tricolour had been presented to 4,000 schoolchildren across the country this year and what Mr Kearney would feel knowing his words had become the national anthem.

On Sunday night a State reception is being held in Dublin castle for 2000 relatives of those who took part in 1916 and 1,000 other guests.

On Saturday President Higgins used an address to descendants to call on Irish people to take responsibility for building a true Republic and said the ideals of the Proclamation can still inspire today.

On Easter Monday further commemorations are planned at each of the seven key battlefield sites in Dublin.

Wreath laying ceremonies, again open to the public, will take place at the 1916 garrisons including Boland’s Mill, the Jacob’s Factory on Bishop Street, Dublin Castle and City Hall, the Four Courts, the Royal College of Surgeons, Moore Street and at St James’ Hospital, which was the South Dublin Union 100 years ago.

Outside of Dublin simultaneous wreath laying ceremonies will be held in Athenry, Cork, Enniscorthy and Ashbourne.

Also on Easter Monday cultural events are planned in more than 200 venues across Dublin city centre including 500 free talks, exhibitions, debates, film, performances and dramatizations, with six outdoor stages and lots of activities for children and families.

For more on events seeIreland.ie