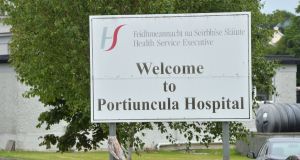 Portiuncula Hospital in Ballinasloe, Co Galway, has treated 13,312 people in its emergency department since the start of the year, while University Hospital Galway has had nearly 25,000 emergency patients.

“So in a sense, services should be transferred to and not from Portiuncula,” said Minister for Communications, Energy and Natural Resources Denis Naughten.

But Portiuncula Hospital’s emergency department is one of nine recommended for closure by the Trauma Steering Group on centralising emergency trauma services.

Politicians and medical staff in the west of Ireland have reacted with a mixture of bemusement and weariness to the leaked report, which has not yet been seen by the Minister for Health, Simon Harris.

The nine would no longer treat patients who had been in traffic incidents, or had serious falls, head injuries, broken limbs or major wounds. These would be referred to centres of excellence.

Locals point out that University Hospital Galway is already bursting at the seams and has been declared as not fit for purpose by Taoiseach Enda Kenny and former health minister Leo Varadkar.

The pressures on Galway have increased since the State’s Medevac 112 air ambulance service began operating from Custume Barracks in Athlone. Most trauma patients in the Midlands and east Galway are flown to there, or to Beaumont in Dublin.

The Irish Coastguard rescue and Defence Forces air ambulance services have improved outcomes for trauma patients, but the Irish Nurses and Midwives Organisation questions the need for some transfers.

Mr Naughten, who is a TD for Roscommon/Galway, believes the Trauma Steering Group’s draft report will be seized with glee by the Saolta Hospital Group, which manages hospitals in the west.

“Saolta doesn’t want two acute hospitals in one county,” he said, “in spite of the fact that Portiuncula’s catchment reaches up to Roscommon and to Athlone.”

Several months ago, a leaked Saolta report suggested that Portiuncula’s 24-hour ED be downgraded to a “type B local unit”, similar to the arrangement that restricted Roscommon Hospital’s emergency department to daytime hours after the 2011 general election.

“Portiuncula is strategically very important, and there were never people on trolleys there until Roscommon’s 24-hour ED closed,” said Mr Naughton.

“We have to take this report with a pinch of salt when remote diagnostics, such as stroke services, are not being used in spite of equipment for same in regional hospitals like Ballinasloe.”

The Minister of State for the Office of Public Works, Sean Canney, who is a Galway East TD and fellow member of the Independent Alliance, said it was “pointless” to talk about channelling all serious trauma to Galway hospital when it was already under so much pressure.