Varadkar to press ahead with minimum alcohol pricing plan 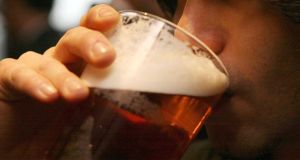 The Government is to press ahead with plans for minimum unit pricing of alcohol despite an adverse ruling on the issue by the European Court of Justice.

The court, in a preliminary judgment on a Scottish proposal for minimum pricing, warned it could risk infringing EU rules on free trade.

Advocate general of the court, Yves Bot, said minimum pricing would be legal only if it could be shown that no other mechanism, such as increasing taxes, was capable of delivering the desired public health benefits.

Minister for Health Leo Varadkar said he was he encouraged by aspects of the ruling that indicated minimum pricing may be compatible with EU law if it could be shown to be more effective than other measures.

“I will be asking my officials to study this opinion and its implications as we wait for the final judgment of the court which is expected towards the end of the year,” Mr Varadkar said. In most cases, the court’s final decision follows the opinion published by the advocate general.

The Public Health (Alcohol) Bill, which includes provisions for minimum pricing along with other drink control measures, will be published in the coming weeks, Mr Varadkar said.

Alcohol Action Ireland, which is campaigning for tighter drinking laws, said the ruling meant the Government could still proceed with its plans for a minimum unit price.

The ruling indicated minimum unit pricing for alcohol was not precluded by EU law if it was considered to be a better measure than taxation for reducing alcohol harm, the group said.

“There is nothing in today’s opinion, ahead of the final response from the European Court of Justice later this year, that impedes the Government from proceeding with the plan,” said chief executive Suzanne Costello.

Minimum pricing had distinct advantages over taxation, primarily in that it can effectively target the heaviest drinkers in society, while having little or no impact on those who drink in a low-risk manner, she said.

Minimum pricing is designed to stop strong alcohol being sold at low price in the off-trade, particularly in supermarkets. The aim is to reduce harmful use of alcohol, particularly binge drinking.

The Scottish parliament voted in 2012 to bring in a minimum unit price of 50p for alcohol but this was challenged by the Scotch Whisky Association. The case went to Europe after the Scottish courts rejected the association’s challenge.

Mr Bot said he considered that “it is for the those responsible for the drafting of those rules to show that increased taxation is not capable of meeting that targeted objective”.

He added: “They adduce no serious evidence to show that, as they maintain, increased taxation would have a ‘disproportionate’ impact by comparison with the objective sought.”

Pubowners expressed disappointment with the ruling. The Licensed Vintners Association, reprenting Dublin publicans, said it represented a lost opportunity for public health policy and was a blow for the ontrade.

The Alcohol Beverage Federation said issues around alcohol misure were complex and could not be solved on price grounds alone.