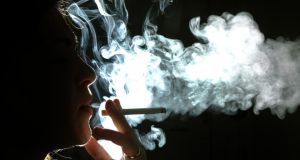 US congressmen and governors and the world’s largest tobacco companies, including Philip Morris, are among the parties to have lobbied the Government to drop its plans for plain cigarette packaging. Photograph: Fabrizio Bensch/Reuters

Four US public health groups have praised the Government’s plan to introduce plain packaging for cigarettes, responding to lobbying efforts by the US Chamber of Commerce and other opponents.

The US Chamber of Commerce presented Mr Kenny with a letter when he visited their offices on his St Patrick’s Day visit. A number of business trade groups warned him in the letter that the packaging proposal could “degrade” intellectual property rights and affect American and Irish businesses.

Referring to the letter, the public health groups told the Taoiseach that the tobacco industry was continuing its “long history of abusing trade and investment agreements to threaten countries over lawfully adopted non-discriminatory tobacco control policies.”

“Ireland joins an illustrious list of countries threatened by the tobacco industry over packaging measures, including Australia, Canada, New Zealand, South Africa and Uruguay, ” they wrote.

Among the parties to have lobbied the Government to drop its plans are US congressmen and governors and the world’s largest tobacco companies, including Philip Morris, makers of Marlboro.

They said that it was “shameful” for US business interests, which include tobacco companies, to use trade agreements as “a cloak for advancing the interests of the tobacco industry.”

The groups urged the government to ensure that the EU-US trade agreement being negotiated protects public health policies from challenges started by the tobacco industry.

“Given the tobacco industry’s ongoing abuse of trade agreements to threaten and bully governments globally, we want you to know that we stand with you in your effort to protect the people of Ireland from the deadly harms of tobacco use,” they said.