Trolley crisis: ‘Full Capacity Protocol’ works in the US, so why not here?

Emergency doctors favour the new plan, but others are not so sure 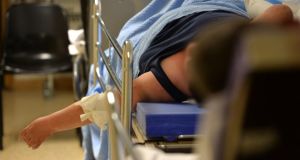 The protocol, which was developed in the US, involves moving patients “upstairs” from the emergency department whether a bed is available or not. The idea is to get people out of the overcrowded ED where the risk of infection is highest and into the hospital proper where care can be provided by equally qualified staff.

The effect of the policy is to distribute the burden throughout the hospital, thereby taking some pressure off the emergency department.

Of course, the change in practice has a psychological effect, too. The problem of overcrowding is no longer seen as one solely affecting the emergency department and is regarded more broadly as one for the entire hospital.

This is not unreasonable. Many languishing in emergency departments are there only because suitable beds are not available elsewhere.

The protocol, described by Varadkar as one of the most successful in dealing with emergency department overcrowding, originated in Stony Brook hospital on Long Island in 2001.

Emergency medicine doctor Peter Viccellio grew frustrated at the crowding in his department and the belief of administrators that the problem might simply disappear. He also realised patients would be better off on a medical or surgical ward, and would prefer not to be in an emergency department.

However, Viccellio’s idea was predicated on the idea of a 24/7 hospital, which is hardly the case in many Irish hospitals. If it were, this crisis would not have erupted because services would have been maintained at a constant level over Christmas.

And what happens when patients continue to flock to the emergency department, even when some there are moved to wards? The Irish Nurses and Midwives Organisation has argued that emergency departments stay crowded, rather than becoming less busy, and the result is that the entire hospital fills up. It says patients have to be moved around multiple times, thereby spreading the risk of infection.

Irish emergency doctors favour the protocol, which was mooted here during the last big trolley crisis in 2011. In fact, many hospitals already place patients from ED on to wards and this doesn’t seem to have made much of a dent in the trolley numbers.

And that speaks for itself.