Halappanavars requested abortion after being told miscarriage was inevitable 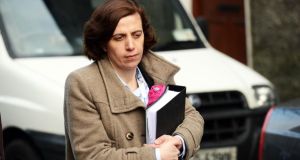 Dr Katherine Astbury advised Savita Halappanavar and her husband that a termination might have to be considered after a diagnosis of sepsis was confirmed. Photograph: Eric Luke

Savita Halappanavar and her husband were told by clinical staff that a termination of her pregnancy was not possible because “their hands were tied” by Irish law, according to a Health Service Executive review group report.

After being admitted to hospital on October 21st, the report states that by October 23rd, the couple were told that a miscarriage was inevitable.

A consultant obstetrician and gynaecologist told the inquiry team that Ms Halappanavar and her husband were emotional and upset at the news.

They then inquired about the possibility of using medication to induce a miscarriage.

“The couple indicated they did not want a protracted waiting time when the outcome of miscarriage was inevitable,” the report states.

The same consultant said the couple were told at the time that a termination was not possible due to legal restrictions. “Under Irish law, if there’s no evidence of risk to the life of the mother, our hands are tied so long as there’s a foetal heartbeat,” the consultant told the couple, according to the report.

Actual risk
The Halappanavars were told that a termination would only be possible if the risk to her life increased. However, this needed to be based on actual risk and not a theoretical risk of infection.

“We can’t predict who is going to get an infection,” the consultant said, according to the report.

The investigation team found that appropriate tests had not been performed to confirm the presence of infection at this stage, despite clinical signs. By this time there had been suggestions of possible underlying infection since the patient’s admission.

It was over 24 hours since the spontaneous rupture of the patient’s membranes, according to the report.

It took until the afternoon of October 24th – after Ms Halappanavar’s condition had deteriorated dramatically – before a termination was offered or considered possible.

Diagnosis of sepsis
The consultant in charge of Ms Halappanavar’s care, who is not named in the report but is known from her inquest to be Dr Katherine Astbury, advised the patient and her husband that a termination might have to be considered after a diagnosis of sepsis was confirmed. However, a scan shortly afterwards reveals the foetal heartbeat had stopped.

After being moved to theatre that afternoon, Ms Halappanavar spontaneously delivered a dead baby girl. She was then transferred to the hospital’s high-dependency unit.

Later that night she was moved to intensive care suffering from septic shock. By October 26th, her condition had deteriorated further as a result of septicaemia and she became critically ill. Two days later, Ms Halappanavar suffered a cardiac arrest and died.

Overall, the report found there was an apparent “over- emphasis on the need not to intervene until the foetal heart stopped”, together with an “under-emphasis on the need to focus appropriate attention” for managing the risk of infection and sepsis in Ms Halappanavar.

It also found that interpretation of the law relating to lawful terminations, along with a lack of clear clinical guidelines and training, was considered to have been a “material contributory factor” in the sub-standard care provided.