Technology adds a special kick to joy of running 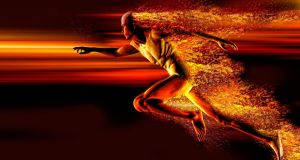 Running used to be a simple affair. At its simplest all you needed were a pair of runners and running clothes.

You didn’t need specialist equipment or to go to a particular venue. You opened your front door and there was your athletic arena spreading out in front of you.

Nowadays it’s slightly more complicated. I never go running without my iPhone. I don’t use it to listen to music (I never listen to music while running). I use it to feed my habit for all those lovely stats like how far I’ve run, all the inclines I’ve conquered, my split times, my overall pace, even (occasionally) my heart rate.

Smart phones using GPS location technology have enabled runners to keep data and statistics and records of their training and runs to a degree that was unimaginable even a decade ago.

The apps will even show a map with your route with all your milestones. And if you frequently run the same routes (most of us are creatures of habit), it’ll tell you fascinating information in the weekly summary you receive by email: “Congratulations, you ran your second fastest uphill section this year.” Well, huzzah for that.

Before the advent of smartphones, I was very curious about the length of the routes that I ran (though you could guess roughly based on the time it took).

I had a Cat Eye odomoter on my bicycle and I frequently used to cycle the routes just to sate my curiosity.

It is rare for me to go for a run without using the iPhone (which I carry in my hand rather than on an armband) although I sometimes feel that I am overreliant on it.

The one exception is when I’m abroad. Data roaming can be so prohibitively expensive that a 30-minute run can end up being more expensive than a flight.

I don’t know if this is good or bad but I have not improved or worsened in that time.

The other thing that’s great about technology and these applications on the phone and on computer is that you can tap into the favourite runs of other people.

Every time I go to a new place or city, I immediately look up running websites to study the best running routes there.

There will always be a handful of enthusiasts who wish to share special routes and it’s all there for you, laid out on a map and often with a full, if occasionally idiosyncratic, description of a route.

Recently, we went to Paris for a break. On the website, I discovered this amazing route, an old disused railway line that runs from Bastille in central Paris for over 4km into the western suburbs.

The elevated route, used by walkers and runners, is wonderful, taking you on a traffic-free runway high above the streets.

However, you grow too attached to the apps.They contain sport’s answer to a druggy buzz – loads of quickfire stats.

And for those like me who love gizmos and devices, they may not be purist but they really add to the pleasure of the run.