Striking the right balance with children and technology 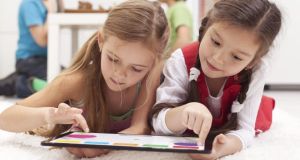 It is oft-lamented in parenting circles how the all-pervasive grasp of modern technology is changing not only the lives our children lead, but even the very nature of childhood itself.

A quick browse on the internet will, ironically, open up a world of myriad threats and deceptions lurking around every digital corner which younger generations may be particularly susceptible to.

While there remains much conjecture, and even some unwarranted scaremongering by certain parties on the topic, it is true that a healthy scepticism towards various aspects of our new media world is helpful in safeguarding children.

Of the 2,000 parents who participated in the British research, 39 per cent said their child owned a tablet device, with 38 per cent having ownership of a mobile phone. While it mightn’t appear surprising that children of ages ranging up to 16 would be in possession of such devices, the results also detailed how children aged 2 to 4 spent over five hours a day using digital technology.

Now, depending on which side of the fence you sit, such statistics could be viewed as a point of major concern on various levels. Or, taken differently, some may consider the strong digital literacy skills that inevitably stem from this volume of activity as potentially beneficial for professional development in later life.

In an accompanying blog post on the company’s website a clinical professional outlines how prolonged exposure to high-energy visible (HEV) light emitted by Android and iPhone/iPad devices may have implications in later life.

Specifically, some of the potential repercussions may come in the form of Age-related Macular Degeneration, Computer Vision Syndrome (causing blurred vision, headaches and fatigue, although more prevalent among adults), and the less severe Digital Eye Strain.

Some of the more eyecatching headlines to broach the issue of increased digital exposure among younger generations have included internet security company AVG’s findings earlier this year which indicated that more children aged 3 to 5 who took part in their study knew how to navigate a digital device (69 per cent) than tie their shoelaces (8 per cent), or who to call in an emergency (35 per cent).

More worryingly, a Telegraph article from last year disclosed survey results that revealed how some children were accidentally accessing extremely explicit material such as violent pornography and scenes of self-harming, and even pretended to be older than they actually were to gain access to certain sites on the internet.

Interestingly, and in spite of these shocking revelations, 82 per cent of parents involved in the same study identified their children as having “great computer skills” which would lend favourably to future job prospects.

It’s a point which throws up a bit of a conundrum for those intent on maligning the changing habits of modern childhood, particularly when you consider that of the 2 to 4 year olds reported as spending over five hours a day on iPads and Android phones, the vast majority were spending their time using additional learning utilities provided through apps and software programmes.

While children aged 5-10 typically spent most of their time gaming, parents of 11-13 year-olds once again challenged conventional perceptions on unhealthy computer-related activity when revealing that their son or daughter spent most of their 7.8 digitally-dedicated hours per day on schooling and homework.

From this we can draw the conclusion that such a rapidly shifting paradigm can’t simply be characterised by a set of preconceptions and stereotypes relating to the allegedly modern phenomenon of the idle, housebound child.

A 2005 paper published by Dublin Institute of Technology and commissioned on behalf of the National Children’s Office revealed how prior to the introduction of digital technology as we know it today, 75 per cent of children in some schools had a television in their own room, while 40 per cent of all children surveyed aged 4 to 12 had a mobile phone.

But despite an increasing allegiance to so-called screen technology of the time, it was still concluded that most participants preferred to play with other children. They also attributed great value to time spent forming social bonds with others whether it be through physical play or via the medium of communal gaming etc.

In the context of developing ICT skills from a young age, another consideration particular to Ireland is the chronic skills shortage that is developing in our ever-expanding tech and software sectors.

Reports as recent as last year outlined how 4,500 jobs had remained unfilled in this country due to a deficiency in candidates of the required skill set, with companies such as AOL, Microsoft and PayPal all within the affected bracket.

Increasingly, Irish children are being encouraged to embrace a digital way of thinking. Whether it be through pioneering volunteer schemes such as CoderDojo which imparts the basic skills of coding to primary school-aged children, or new initiatives being brought into primary and secondary education providing digital learning in the classroom, members of our younger generations are becoming more and more comfortable in their exposure to the technologies of tomorrow.

In the grand scheme of things, it must be concluded that there are certain benefits that derive exclusively from children utilising their natural curiosity to explore and acclimatise themselves with digital technology and future generation software.

That said, experts agree that such enthusiasm must be applied with moderation so as not to stunt normal social development and interpersonal skills, and there should be adequate levels of supervision by parents to ensure that young children’s web browsing doesn’t throw up any nasty or unexpected surprises.