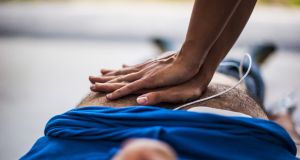 The report shows the rate at which patients die in hospital from heart attacks (acute myocardial infarction) throughout the Republic has dropped 36% in a decade and the Irish mortality rate is well below the OECD average. Photograph: Getty Images

A patient’s chances of dying in Dublin after a heart attack or stroke vary significantly from hospital to hospital, a new report shows.

St Vincent’s hospital in Elm Park has the highest mortality rate for heart attack and haemorrhagic stroke patients among Dublin hospitals, according to the Department of Health report.

Its mortality rate for heart attack patients is significantly higher than the national average. More than eight patients out of every 100 cases die within 30 days of admission for their heart attack, almost twice that of the Mater hospital in the same hospital group.

Thirty out of every 100 patients in St Vincent’s die within 30 days of their haemorrhagic stroke, compared to 28 in the Mater, 13 in Tallaght hospital and 12 in Beaumont, the annual report of the National Healthcare Quality Reporting System shows.

St Vincent’s performed better on strokes caused by clots (ischaemia) with a 30-day mortality rate of 7.7 per 100 patients; this compares to 5.45 in the Mater, six in Tallaght and more than eight in St James’s and Beaumont hospitals.

The report says there can be many reasons why the figures from one hospital differ from the national average, including difference in the types of patients treated, inconsistencies in the quality of data gathered, differences in access to medical care prior to arrival in hospital and transfer patterns between hospitals.

“Therefore, it cannot be concluded that a high mortality rate is indicative of poor quality care. Rather, it provides an indication that a further evaluation should be carried out to determine the reasons for the identified variation.”

A spokesman for St Vincent’s said the quality of a clinical service could not be measured by one performance indicator alone and a single reporting period should not be overinterpreted. In previous time periods, the data from the hospital was within the national average, he said.

The report shows the rate at which patients die in hospital from heart attacks (acute myocardial infarction) throughout the Republic has dropped 36 per cent in a decade and the Irish mortality rate is well below the OECD average.

Minister for Health Simon Harris said the report showed many areas of the health service were performing well while there was “room for improvement” in others.

The Irish death rate for haemorrhagic stroke is above the OECD average but has dropped 25 per cent over a decade. Three hospitals – St Vincents in Dublin, Naas and Galway – had rates that were significantly higher than the national average. The lowest rates were in Beaumont and Tallaght hospitals in Dublin.

For ischaemia strokes, Cork University Hospital was significantly above average. Ireland’s death rate from ischaemic stroke has fallen 21 per cent in a decade but is still above the international average.

The report says differences between hospitals and regions may arise for many reasons, and not just because of the quality of care provided. It identifies wide variations across geographic areas for a variety of indicators.

Among the areas singled out as needing improvement are the lower uptake of cervical cancer vaccine by older women, and variations in Caesarean section and mortality rates in different hospitals.

Meanwhile, immunisation and cancer screening rates continue to improve, and survival rates for many cancers are rising faster than in the rest of the EU.