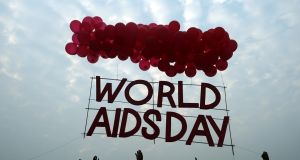 Indian social activists and children release a World Aids Day sign tied balloons in Kolkata, December 1st, 2015. According to the UN Aids programme, India had the third-largest number of people living with HIV in the world at the end of 2013. Photograph: Dibyangshu Sarkar/AFP/Getty Images

A sharp rise in HIV cases in recent months has prompted calls for the wider introduction of free, rapid testing for the disease.

The number of HIV diagnoses was the same as for the first half of 2014 in the first half this year, but has soared since, the Oireachtas health committee has been told.

Provisional figures indicate 427 new diagnoses for this year up to the end of November - up 85 over the same period last year, the meeting held to mark World Aids Day on December 1st has heard.

Niall Mulligan, chief executive of HIV Ireland, said some of the increase was due to increased testing, but it was still estimated that 30 per cent of people living with HIV did not know they had the virus.

More than 7,000 people have been diagnosed with HIV here since the 1990s, and about 3,500 are currently living with the disease, according to Mr Mulligan. Men who have sex with men accounted for half of all cases last year.

HIV stigma was institutionalised in Ireland, he said, citing the examples of a €100,000 compensation award to a garda who was spat on by a man “whose HIV status wasn’t even known”, and a social protection worker who had to take leave for six months because she, too, was spat upon. “There was no risk, even if the individuals were HIV positive,” he pointed out.

“Some of our work last year included supporting a man who got a job as a fitness instructor on a cruise ship and then was fired two days later when he disclosed his positive status; supporting a woman who was told by a leading national agency she could not avail of its services; convincing a creche manager she did not have to inform all parents of one child’s HIV status; supporting a woman who was informed by a holistic therapy college that she could not practice reflexology; and several dentists who refused to treat our service users, referring them instead to the Dublin Dental Hospital even for minor procedures.”

Mr Mulligan said the change in name was a reflection of the reality that for the vast majority of people living with HIV, progression to Aids was no longer inevitable.

Deirdre Seery, chief executive of the Cork Sexual Health Clinic, called for an increase in rapid, community-based and free testing for HIV.

New forms of outreach testing can provide a result in one minute, she pointed out.

HIV lacks visibility, particularly since drugs were developed to treat the condition, so patients were unlikely to develop Aids, she said, but this may have led to complacency.

“There are new, younger generations of people becoming HIV positive who would not have been exposed to the old safer sex and safer drug use campaigns.”

Since 2005, the number of diagnoses among men who have sex with men has increased by 210 per cent, Tiernan Brady of the Gay and Lesbian Equality Network (Glen) told the committee.

MSM account for a growing proportion of cases and the age of diagnosis has fallen from 37 years to 31 years.