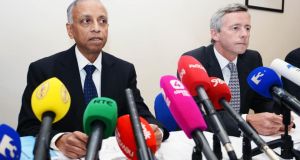 Sabaratnam Arulkatumaran (left), Chairperson, and Dr Philip Crowler, National Director for Quality and Patient Safety, at the publication of the HSE clinical review report into the death of Savita Halappanavar on Thursday. Photograph: Eric Luke

Two inquiries down into the death of Savita Halappanavar and it is now abundantly clear that a cascade of errors and uncertainty about the law on abortion contributed largely to her death.

The report of the HSE inquiry team chaired by Prof Sir Sabaratnam Arulkumaran is, as it says it set out to be, a “methodical, accurate and impartial” investigation into the factors which caused the 31-year-old’s death in University Hospital Galway last October.

It goes further than the inquest in linking the concerns of staff about the legal situation, “whether clear or not”, to the exercise of their professional judgment.

“The interpretation of the law related to lawful termination in Ireland, and particularly the lack of clear clinical guidelines and training, is considered to have been a material contributory factor,” it states.

Prof Arulkumaran said that if Ms Halappanavar had been his patient in the UK, he would have performed a termination earlier in order to counter the risk of sepsis. As it was, her consultant in UHG, Dr Katherine Astbury, felt this point was not arrived at until four days after admission, when Ms Halappanavar was already moving from sepsis to septic shock, which has a mortality risk of 60 per cent.

‘Safety investigation’
Although the report into “incident 50278” – no names are mentioned, not even Ms Halappanavar’s – is fair, it is not comprehensive. As Prof Arulkumaran said yesterday, this is a “safety investigation” not a fault-finding exercise. No individual blame is apportioned.

The aim is to ensure that something like this never happens again. It will be up to Ms Halappanavar’s husband Praveen to test issue of negligence or liability in the civil courts, and to bring complaints against individual doctors or midwives to their regulatory bodies, if he so chooses.

But even accepting this limitation – justified by health authorities on the basis that it represents the best way of encouraging staff to come forward where errors occur – there are still serious gaps in what we know about operations in the hospital.

How busy were the staff during that fateful week last October? What was the bed occupancy in the maternity ward? How many staff doctors and midwives were present, or absent for holidays or other reasons? What cover arrangements applied? What is the ratio of staff to the number of deliveries annually, and is it within accepted norms?

Either way, the HSE has declined to answer these kinds of questions over the past six months and no answers were forthcoming from a hospital spokesman yesterday.

Many similarities
The hospital was also unable to say yesterday what changes it had made on foot of a serious sepsis case, dating from 2009, which it settled with a former patient this week.

There are many similarities between the two cases, particularly in relation to the treatment provided, yet three years later when Ms Halappanavar was admitted, the hospital still hadn’t introduced the maternal early warning score system that Prof Arulkumaran believes might have saved her life. It has now introduced this system, as well as training staff in the recognition of sepsis but, as we learned yesterday, this is on foot of interim recommendations made by the inquiry team last November.

It is to be hoped that a third report prompted by Ms Halappanavar’s death, due later this year from the Health Information and Quality Authority, may answer the remaining questions surrounding this tragic case.

Covid-19: Carroll’s Cuisine in Tullamore urged ‘to close’ amid outbreak