Parents told to ‘lock up children’ when cutting the grass 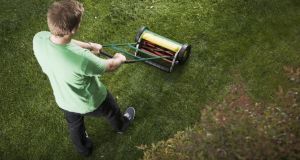 Parents have been advised to keep children a safe distance from working lawnmowers after a number of youngsters were seriously injured while playing in gardens in recent weeks.

Parents have been advised to keep children a safe distance from working lawnmowers after a number of youngsters were seriously injured while playing in gardens in recent weeks.

The Irish Association of Plastic Surgeons said four children had been treated for severe lawnmower-related injuries in the Leinster region alone in the last six weeks.

Two children suffered what the association described as “horrific foot injuries” and two were treated for “severe hand injuries”.

“[THE INCIDENTS] resulted in both patients losing most of their toes and a lot of their foot. We also had two other children with severe hand injuries, one who lost all the digits on one hand and the second, the majority of all their digits,” Irish Association of Plastic Surgeons president Dr Patricia Eadie said.

In three of the four cases, Dr Eadie said, children were injured by ride-on lawnmowers.

“Whereas a parent would never allow children to drive a car, for whatever reason they don’t exercise the same vigilance with what is a motorised blade. This just makes no sense to us.”

Adults have been treated for serious lawnmower related hand injuries in the Leinster area on three occasions in the same period. The injuries were sustained while attempting to unblock lawnmowers while the motor was still running.

“Lock up your children. That should be the first thing anyone does before starting the lawnmower or have a second adult to supervise them,” Dr Eadie added.

“Our advice to anyone unfortunate enough to lose digits in this way is to place any severed digits into a plastic bag, place the bag into a container of ice, and get the patient to an emergency room as quickly as possible.”