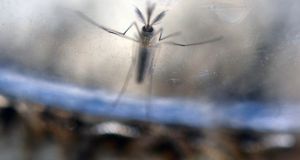 The Zika virus, which is spread primarily by mosquitoes, has been linked to thousands of birth defects in Brazil. File photograph: Marvin Recinos/AFP/Getty Images

The number of people diagnosed with the Zika virus in Ireland has risen to three, according to the HSE.

Two of the cases relate to people who picked up the virus in Colombia and were diagnosed on their return to Ireland. The third case originated in Barbados.

The first case resulted from travel in Colombia last year but the other two cases relate to travel this year, the HSE’s Health Protection Surveillance Centre (HPSC) says.

It has already said the first two cases were unrelated to each other and both patients are well. The individuals, neither of whom was pregnant, had a history of travel to Zika affected countries.

According to the HSE, the diagnosis of Zika cases in Ireland is “not an unexpected event” as many other European countries have reported cases as a result of people travelling to affected areas.

Zika, which has been declared a global emergency by the World Health Organisation, has now spread to 30 countries.

The disease, which is spread primarily by mosquitoes, has been linked to thousands of birth defects in Brazil, which has recorded almost 5,000 cases of the virus.

Health chiefs have urged Irish people who fall ill within two weeks of returning from an affected area to seek medical help.

For most people, Zika causes only a mild illness, usually without symptoms. However, infection has been strongly linked with a serious birth condition called microcephaly. Microcephaly means a baby born with an unusually small head. In these cases, the baby’s brain may not have formed properly during pregnancy.

Only one case of possible person-to-person spread, through sex, has been reported. The HPSC says further evidence is needed to confirm if sex is a way of spreading Zika.