Number of patients on hospital trolleys at record high of 601 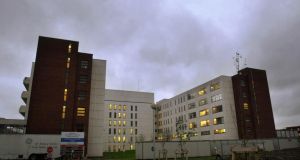 Nursing staff at Dublin’s Beaumont Hospital are to serve notice of industrial action on Tuesday and begin a work to rule later this month. Photograph: Dara MacDónaill/The Irish Times.

The number of people in hospital emergency departments or on wards waiting for admission has reached a record high of 601, the Irish Nurses and Midwives’ Organisation (INMO) has said.

The Government promised earlier in its term never to have more than 569 patients, the previous record, on trolleys and the commitment had now been broken following a surge in New Year presentations. The figure was 563 on Monday.

The INMO’s Trolley Watch survey shows the largest number waiting for hospital beds are at Our Lady of Lourdes Hospital in Drogheda (45); University Hospital Limerick (41) and Beaumont Hospital in Dublin (41).

The INMO is balloting members about taking industrial action at a number of hospitals across the country amid concern about the affect of overcrowding on patient safety and the impact of an increased workload on members.

Members of the union at Beaumont on Monday voted in favour of industrial action and notice of a work to rule starting on January 27th was to be presented to hospital management on Tuesday.

Lorraine Monaghan of the INMO warned that the action could escalate to work stoppages if the situation does not improve.

Ballots of members on industrial action were being or would also be held at Drogheda, Naas, Mullingar, Galway and the Mid-West (Limerick) Hospital Group, the union said.

“This is because of the failure of management to address this crisis which is severely compromising care and resulting in excessive workloads for nursing staff,” it added.

The delayed discharge of patients to short-term care facilities and nursing homes is regarded as a significant factor in the current overcrowding situation.

Angela Fitzgerald, the HSE’s deputy national director of acute hospitals, said there were about 800 patients waiting to be discharged from hospital beds across the State. This was up from some 600 at this time last year.

She told RTÉ Morning Ireland the situation with overcrowding in hospital over the last 48 hours was “very concerning” and “created safety concerns”. However, she would not say if she believed overcrowded hospitals were safe for patients to attend.

“I think what we know is overcrowding is not a good situation,” she said. “I think the overcrowding situation is not an acceptable situation and I think we’ve made that clear.”

Ms Fitzgerald said she shared the concerns of the public and that the HSE was committed to addressing the situation.

It has emerged that the Government rejected a request by the Health Service Executive before the last budget for €100 million to free up hospital beds and reduce overcrowding.

The HSE plan to discharge hundreds of elderly patients to step-down facilities such as nursing homes would have greatly reduced the pressure on emergency departments. Instead, €25 million was allocated to tackle the problem.

Ms Fitzgerald said the HSE had sought additional funds to deal with the issue of delayed discharges but she declined to confirm the amount requested.

Ms Monaghan said staff at Beaumount did not want to take industrial action but were faced with a “deplorable situation”.

“Patients are being left on trolleys and chairs for days waiting for beds and in some cases lying side by side,” she said.

Ms Monaghan said there was little privacy for patients in these cases and that some were being treated in front of others which could be a “humiliating” experience. Staff had an unmanageable workload and delayed discharges were a significant factor in the overcrowding, she said, adding that 35 admitted patients were on trolleys and chairs awaiting beds on Tuesday morning.

The HSE has appealed to patients to go to their GPs in the first instance instead of going to a hospital emergency department. It said all hospitals had invoked plans to open additional overflow areas, cut back on non-emergency surgery, provide additional testing facilities and strengthen the discharge planning for patients.

“Hospitals are currently taking these steps, as required, so that patients who need to be admitted to hospital are admitted to a bed as soon as possible.”

The number of patients on trolleys peaked at 569 in 2011, after which the Government committed to never again allowing them to rise so high.

Minister for Health Leo Varadkar has promised a number of short-term measures to alleviate pressure on emergency departments this winter.

Last month, he warned the 569 target was in danger of being breached if additional community beds and extra nursing home places were not provided and planned surgery cancelled.

An emergency taskforce was established by the Minister before Christmas to examine the issue of overcrowding and INMO general secretary Liam Doran said it should meet again to agree measures to “alleviate” the crisis.

The union recommends the opening of additional beds, hiring more nursing staff and for extra money to be put into home care and community nursing.

It is also calling for the HSE and other hospital employers to examine their compliance with health and safety legislation in relation to staff working in emergency departments.

“The INMO would remind employers that they have a legal obligation to ensure a safe system of work, for their staff, and health employers are failing, in this regard, in these overcrowded units,” it said.