Cannabis oil ‘all we have left but nobody will prescribe it’, says distraught Vera Twomey 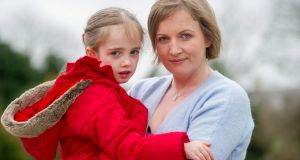 The mother of a six-year-old girl with a rare and catastrophic form of epilepsy fears her daughter will die unless a consultant goes out on a limb and prescribes cannabis oil to lessen her seizures.

Ava Barry from Aghabullogue in Co Cork endures hundreds of seizures every year.

Her mother, Vera Twomey, fears her life will be cut prematurely short unless a doctor prescribes cannabis oil which has been known to control the severity and number of seizures.

Ava suffers from Dravet syndrome and can have up to 16 seizures a day. Vera says doctors have tried all sorts of medication in a bid to control the seizures, but with little success.

“The bottom line is my daughter is going to die unless she gets help. I am just at the end of my tether and thinking what am I going to do? We have been through 11 medications with Ava, all of which have failed.

“We have tried all sorts of therapies – cranial sacral therapy, massage therapy, equine therapy, occupational therapy, you name it. Cannabis oil is all we have left but nobody will prescribe it.”

“I have stood at hospital beds, and nurses have rushed back and forth, and she is still seizing and all I can do is pray.”

Ava is rushed to hospital at least once a week. Sometimes the trigger for a seizure is as simple as a bath being too warm. Her parents believe her best hope lies in CBD, an oil derived from the cannabis plant.

A number of states in the US have laws allowing cannabis to be recommended and dispensed to people for medical reasons. However, Ava’s family have been unable to receive the oil in Ireland.

“We are unable to get a consultant from Ireland to prescribe it. But there are extremely well respected doctors in other parts of the world who prescribe it. Just because doctors in Ireland won’t prescribe it doesn’t mean it is not working in other countries for other patients.”

Meanwhile, a Bill has been introduced in the Dáil to allow the use of cannabis and cannabis-related products for medicinal purposes, through the provision of a cannabis regulation authority.

Ms Smith said the second group that uses it quite frequently are those with multiple sclerosis.

Vera says all she wants is a semi-normal life for her extraordinary little girl. “She likes Tom Jones and . . . would like to ‘Talk to Joe’ as she is a fan of Joe Duffy. She knows her nursery rhymes. She likes the Bee Gees. She likes singing, Yes Sir I Can Boogie.

“She is an amazing kid who just needs a chance in life. We know there is no cure but if CBD could help then why not prescribe it for her? They said she would never walk or talk. She does both. We just want her to live as good a life as is possible.”