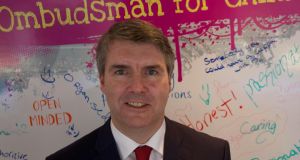 Dr Niall Muldoon, Ombudsman for Children: he said the new National Taskforce on Youth Mental Health “has the potential to drive real change in an area where it is very much needed”.

The Ombudsman for Children has said the new National Taskforce on Youth Mental Health will need to ensure it delivers specific actions that will “make a real difference in the lives of young people”.

Dr Niall Muldoon was commenting on the initiative to bring together people appropriately placed to examine issues faced by children and young people.

“The establishment of a [taskforce] is a very positive development and one that has the potential to drive real change in an area where it is very much needed,” he said. However, it must identify “clear actions” which would be “supported with the necessary resources”.

The body was announced by Minister of State for Mental Health and Older People Helen McEntee who will chair. It will meet in September.

Among the group will be a representative from Facebook; Mayo footballer Rob Hennelly who has spoken about mental health; and Dr Tony Bates, chief executive of Jigsaw.

Other members include Mary Cunningham of the National Youth Council of Ireland; Grainia Long of the Irish Society for the Prevention of Cruelty to Children; Cian Power from the Union of Students of Ireland; Prof Mary Cannon of the Royal College of Surgeons; Dr Shari McDaid of Mental Health Reform; Moninne Griffith of BeLonG To; Ian Power of SpunOut.ie; and Jim Breen of Cycle Against Suicide. A related group to assist the taskforce will be co-chaired by Niall Breslin, and Emma Farrell.