HSE has returned 4,250 cards taken from patients during review 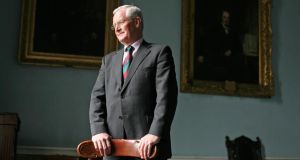 The consultation process is designed to feed into the work of an expert panel chaired by Prof Frank Keane. Photograph: Kenneth O’Halloran.

A public consultation on extending eligibility for medical cards on the basis of medical condition has attracted almost 2,500 submissions.

The Health Service Executive said that by Friday, 2,340 submissions had been received from patients, parents or family members and professional or patient representative bodies. The closing date for submissions is today.

The high number of submissions is an indication of the level of expectation around the process, which is likely to prove challenging for the HSE and the Minister for Health in the coming months.

The HSE did not release details of those making submissions but the almost 100 submissions from representative bodies are likely to be overwhelmingly from patient groups seeking to have their condition considered for eligibility under the new scheme.

The majority of submissions – 61 per cent or almost 1,500 – were from people living with a condition. Almost 700 submissions, or 29 per cent, came from parents or family members.

The consultation process is designed to feed into the work of an expert panel chaired by Prof Frank Keane, past president of the Royal College of Surgeons in Ireland. This panel, which is due to report back in September, will make recommendations on which conditions would be considered for automatic eligibility for a medical card, and what level of severity would be required for eligibility.

Meanwhile, the HSE has returned 4,250 of the 15,300 medical cards which were taken from patients during a controversial review process between July 2011 and the end of last month.

A spokesman said it was “on track” to return all 15,300 by the promised deadline of mid-July.