Less than 10% of mental health facilities compliant with law 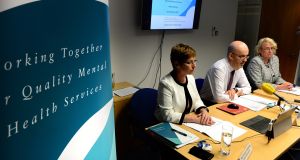 Less than 10 per cent of mental health facilities inspected last year were fully compliant with legal requirements, according to the Mental Health Commission.

Of 61 approved centres inspected, six were rated compliant and the remainder were non-compliant to varying degrees, the Commission said on Monday.

The lowest levels of compliance related to the admission of children, the handling of medicines and issues relating to premises.

Only one of the fully compliant centres was HSE-run. Almost half of the centres breached rules on seclusion, meaning patients were kept in seclusion contrary to the rules and in a way that could pose serious risk to their safety and well-being, according to Dr Susan Finnerty, inspector of mental health services.

The commission expressed concern at a 9 per cent increase in the number of involuntary admissions, up from 2,162 in 2014 to 2,363 last year.

“We are particularly concerned at the proportion of involuntary admissions where the family and gardaí are the primary referrers (47 per cent and 23 per cent, respectively),”said Mr Saunders, who called at the launch of the commission’s 2015 annual report for a review of the scheme.

The commission called for a formal review of the Government’s policy on mental health - A Vision for Change - 10 years after it was published. It also wants independent monitoring of the policy to identify areas where it is and isn’t working effectively.

Last year, there were 95 admissions of children to adult units, in spite of official policy that this should not happen.

“This situation is unacceptable and needs to be addressed as a matter of urgency,” Mr Saunders said.

Commission chairman John Saunders said there has been a slow but welcome increase in compliance of mental health facilities with legislative requirements. However, there was considerable inconsistency across boundaries.

Further progress could be made in the move from institutional to community care, and the greater involvement of service users and their families, he said.

“There is still a significant absence of psychology, social work, occupational therapy and other multidisciplinary team members and we will not have a recovery-orientated service unless staff make-up reflects the move from a purely medical model to a more holistic bio-psychosocial one.”