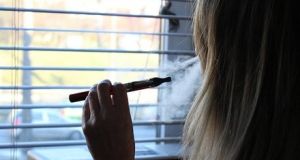 An Irish cancer charity said that while it recognised e-cigarettes were safer than tobacco, it could not recommend them for use as a smoking cessation device until further research was carried out. Photograph: Getty Images

The Irish Cancer Society has said it cannot recommend e-cigarettes to help people stop smoking until further research is carried out into the long-term health implications.

Britain’s Royal College of Physicians (RCP) said on Thursday thatsuch devices were likely to bring benefits for public health and should be widely promoted to smokers to help them quit tobacco.

The influential organisation said tobacco smoking was both addictive and lethal, and concluded that e-cigarettes are “much safer than smoking”.

Responding, the Irish cancer charity said that while it recognised e-cigarettes were safer than tobacco, it could not recommend them for use as a smoking cessation device until further research was carried out.

“We continue to monitor developments in the field closely, but as today’s report notes the health effects of long-term use are as yet unknown. Long-term research into the health impacts and patterns of use are required,” a spokesman said.

Experts at the RCP looked into the science, public policy, regulation and ethics surrounding e-cigarettes and made a series of conclusions about the devices including that e-cigarettes are not a “gateway to smoking”.

It found that in the UK, e-cigarettes were used mostly by those who are already using, or have used, tobacco.

The doctors’ group also said there was no evidence that e-cigarettes resulted in normalisation of smoking, and said the devices were beneficial in encouraging smokers to quit.

Legislation outlawing the use of cigarettes, cigars and pipes in cars and other vehicles where children are present came into effect on January 1st, but it did not cover e-cigarettes.

Minister for Children Dr James Reilly said he was “very concerned” about e-cigarettes.

“We didn’t have sufficient information and I didn’t want the ‘perfect’ to get in the way of the ‘good’ in relation to including that in the legislation,” Dr Reilly said.

“But the evidence is starting to pile up now that this is a serious problem.”

Dr Reilly said he was concerned that e-cigarettes could become a “gateway” to traditional nicotine consumption. “I don’t want to undermine anything we’re doing by not having good, strong evidence, well-researched. I know that there are people in America very concerned about this.”

Forest Ireland, which advocates on behalf of smokers, welcomed the British report.

Spokesman John Mallon said: “We hope the Irish Government takes note of this significant report in any future moves to regulate e-cigarettes and vaping.”

He said the conclusions also “called into question” the need for strict new rules around e-cigarette marketing contained in the EU’s Tobacco Products Directive which is due to be implemented next month.

Its director Michael Kenneally said it highlighted “the important role vaping products can play for those looking for alternatives to cigarettes”.

“Given we have no similar reports here in Ireland, we hope the RCP report will assist our own Department of Health in ensuring balanced and proportionate regulation of vaping products when transposing the Tobacco Products Directive in just three weeks’ time, on May 20th.”