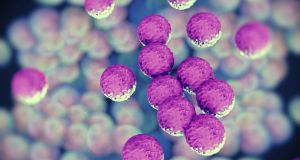 MRSA bacteria. Researchers have discovered a microbe living in some people’s noses that produces a substance that is able to kill dangerous bacteria, including superbugs. File photograph: Getty Images/iStockphoto

Scientists have found a new weapon in the fight against antibiotic-resistant superbugs and it comes from an unlikely source: the human nose.

Researchers have discovered a microbe living in some people’s noses that produces a substance that is able to kill dangerous bacteria, including superbugs.

Researchers from the University of Tübingen in Germany found that the substance is a type of antibiotic which has never seen before.

They also acknowledged that the source of this antibody is somewhat unusual.

“Normally, antibiotics are formed only by soil bacteria and fungi,” said Prof Andreas Peschel, one of the lead authors of the work.

“The notion that human [bacteria] may also be a source of antimicrobial agents is a new discovery.”

The findings were published on Wednesday in the scientific journal Nature.

Infections caused by superbugs are a major concern, with a steady increase in the number of cases and a lack of effective treatments.

Sustained overuse of antibiotics has led to bacteria that is able to survive such treatment, leading to superbugs such as MRSA.

International medical research bodies have warned that superbugs are expected to cause more deaths than cancer in the next few decades.

The organism discovered by the researchers may point towards new kinds of antibiotic substances.

Scientists tested the effect of lugdunin against different types of harmful bacteria and found that it killed them efficiently.

Even antibiotic-resistant superbugs which are responsible for dangerous hospital infections were eliminated by this new compound, including MRSA.