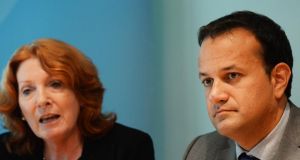 A HSE spokeswoman confirmed there had been a “huge volume” for traffic on the first day of registration for the service which begins on July 1st.

Parents have instead being directed to a different part of the site where they can register directly. The address is https://www.pcrsonline.ie/portal/free-gp-care-web/pub.

Parents can check whether or not their GP is participating in the scheme here.

The National Association of General Practitioners (NAGP) has opposed the scheme on the basis that it will lead to greater workloads for doctors and unnecessary visits by parents with their children.

Ms Lynch, who has responsibility for primary health care, dismissed the NAGP’s argument.

“We haven’t invented more children. The children who are covered by this are the children who have always been the patients of GPs in this country,” she told RTÉ’s Morning Ireland radio programme.

“Of course parents will be more inclined when a child first becomes ill rather than to wait until it is dangerous to wait before going to their GP.

“The barrier will not be finance. We are talking about young hard-pressed parents who are at work in the main. If people say they will make irresponsible visits, I don’t believe that.”

A considerable number of doctors are holding out against the scheme, but both the Minister for Health Leo Varadkar and Ms Lynch said a “critical mass” had signed up and the scheme will go ahead as planned.

According to figures released by the Department of Health on Friday some 59 per cent of GPs have signed up to the scheme with large variations across the country.

In Donegal some 94 per cent have signed up while the figure is 8 per cent in Tipperary.

Ms Lynch said the Department of Health is looking to sign up GPs who might have returned to Ireland from abroad and want to join the General Medical Services (GMS).

“This is the future. There is no going back on this. We are hopeful that we will have sufficient coverage over the country that people will have access to a GP,” she said.

She conceded parents in urban areas will have more choice than those in rural areas where doctors are holding out against the scheme.

However, the advent of larger primary care centres will make it easier for GP practices to cope, she believed.

“I don’t believe there is a GP in the country that isn’t busy from one day to another,” she said. “What I do know is that most practices have a lot of GPs who are working together which is a sensible process that we are working on to make sure A lot of the time, it is about reassurance and the practice nurse will be able to work on this.