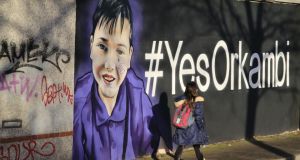 A mural on Charlemont Place in Dublin. Authorities in Ireland, the UK and several other European countries have balked at CF drug Orkambi’s high price. Photograph: Nick Bradshaw

The Health Service Executive and the makers of Orkambi have failed to reach agreement in price talks on the groundbreaking but highly expensive cystic fibrosis drug.

The HSE drug committee has completed its consideration of Orkambi without making a recommendation in favour of providing the drug free to more than 550 Irish CF patients, according to sources.

The manufacturer, US firm Vertex Pharmaceuticals, made a new price offer in renewed talks early last month but subsequent contacts between the company and the HSE failed to produce an agreement.

Vertex initially sought €159,000 per patient and the HSE estimated the cost to the exchequer of approval would be almost €400 million over five years. The company has reduced its asking price since then, but the amount sought is still well above established cost-effectiveness thresholds for new drugs. Before the talks began, the HSE said it was willing to pay up to €75 million.

The HSE’s drug committee has now referred the issue for a final decision to the organisation’s executive management team, chaired by director general Tony O’Brien.

It is unlikely to give the go-ahead for the drug without a firm indication from Government that extra funding will be made available to pay for it. Under revised drug-approval procedures, the Department of Public Expenditure as well as the Department of Health has an input to the process.

Minister for Health Simon Harris, who described the amount originally sought by Vertex as “exorbitant”, has said his department can consider requests for funding a new drug only “if the HSE decides to reimburse the drug but does not have the resources to fund the medicine”.

Vertex said last month it met the HSE on January 5th, where it presented a proposal that recognised “the unique burden of CF in Ireland and reflects our need for continued significant investment to development new medicines”.

The company has also made a proposals in relations to the supply of another drug, Kalydeco, for 18 children aged between two and five years.

Contacts between UK-based representatives of the company and the HSE continued during January, and a number of pricing permutations were discussed. These included an overall price for use of the drug for all indications and separate pricing for its use for adults, children and for specific CF mutations.

In a statement on Tuesday, Vertex said it submitted proposals to provide access to Kalydeco and Orkambi to the HSE two weeks ago and shared the frustrations of those seeking to use the drugs at the “apparent lack of urgency to make these medicines available”.

“Thousands of people are living with CF on other countries have access to this medicine and Ireland should not be an exception,” it said. “We remain ready to assist in whatever way we can.”

The failure to reach agreement on approving the drug will come as a disappointment to CF patients, who have lobbied vigorously for its approval. They say its use could save the health service money by improving patients’ lung function, and by reducing hospitalisation and exacerbations by 40 per cent.

Orkambi is available in Germany, the US and Austria, but authorities in Ireland, the UK and several other European countries have balked at its high price.