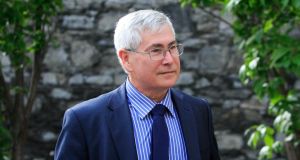 A Medical Council inquiry has resumed into allegations of poor professional performance by a consultant obstetrician and gynaecologist, Dr Peter Van Geene, at Aut Even private hospital in Kilkenny.

Among the allegations Dr Van Geene faces are:

- It is alleged Dr Van Geene carried out a vaginal hysterectomy on April 7th, 2009 without carrying out the necessary investigation to see if it was clinically justified.

- In a second case, it is alleged that he carried out a hysterectomy and pelvic floor repair on July 27th, 2010 in such a way that it caused significant blood loss and that he did not tell the patient an adverse event had occurred or why it occurred.

- In a third case, on August 23rd, 2011, it is alleged he carried out a hysterectomy without getting informed consent and that he failed to explain the risks and any adverse consequences of the procedures.

- In the fourth case, on October 11th, 2011, it is alleged he carried out a vaginal hysterectomy and pelvic floor repair which caused significant post-operative bleed which required six units of blood and four units of plasma to be transfused.

It is alleged that the patients suffered significant and serious complications after the procedures.

On Tuesday afternoon, a woman described how her life had been “destroyed” by Mr Van Geene.

Helen Cruise, a mother of seven, said she had been passing urine and bowel movements more frequently in 2008, but it had started to become “out of hand”.

She was referred by her GP to where she said she believed her bowel problem and prolapsed womb would be operated on at Aut Even private hospital in Kilkenny.

It is alleged Mr Van Geene failed to arrange formal consent for a hysterectomy on Ms Cruise to be carried out in August 2011 and failed to explain what procedure he was carrying out on her.

“I can’t remember signing anything. I thought I was getting fixed and I was delighted to finally be getting treated,” Ms Cruise said.

She had been a patient at St Luke’s hospital in Co Kilkenny, suffering with severe urinary incontinence and was placed on a waiting list for the procedure.

She was told she could have the procedure through the national treatment purchase fund in Aut Even.

She said she signed a consent form before the operation, but added she was not sure what the procedure involved.

She said she never met Mr Van Geene before the operation

Ms Cruise said it was not explained to her why she was getting an epidural but she didn’t question it because she thought it meant she would get to go home quicker.

She said it was only when she was in the operating theatre that Mr Van Geene told her he would be carrying out a hysterectomy.

“I felt really sad but my womb was no good to me anymore; I was 58 years old and I was sterilised,” she said.

Following the procedure, Ms Cruise suffered significant post operative bleeding which required a laparotomy and the transfusion of six units of blood.

She said Mr Van Geene told her following the operation: “He took out my womb and threw it in a bucket on the floor.”

She said he also told her “he whipped out one ovary.”

Ms Cruise said she felt very unwell after the procedure and that she thought she was going to die.

She said that Mr Van Geene visited her in St Luke’s where he told her the post operation bleeding she suffered was because she had coughed during the operation.

She said he accused her of coughing and “bursting herself”.

“He was like a mad man shouting and roaring at me. He went berserk,” she said. “I told him he needed anger management.”

Ms Cruise said Mr Van Geene accused her of wanting money or litigation. “I said I didn’t know what litigation was,” she said.

Ms Cruise said she lost two stone following the operation, was black and blue and in severe pain.

She said he told her he was discharging her as a patient.

It is alleged he failed to record the condition of Ms Cruise upon discharge and failed to recommend follow up treatment she required.

“Mentally, I’m destroyed. My whole life has been turned upside down. I wet myself and I’m crippled with pain. I can’t walk properly anymore and I can’t work,” she said.

Ms Cruise said she suffers chronic pain and is on a two-year waiting list to get pain injections for her groin.

She said she suffers from incontinence and has to wear a nappy.

“He has ruined my life,” she said.

Ms Cruise’s daughter told the medical council inquiry she was “shocked” by the treatment given to her mother by the doctor.

Anneka Cruise said that, when she asked for an explanation about her mother’s condition, Mr Van Geene told her he managed to stop the bleeding and walked off.

She said when she asked him about removing ovaries, Mr Van Geene said “I ripped that one (second ovary) out too.”

Defence for Mr Van Geene, Eugene Gleeson said Mr Van Geene say he removed the ovary to stem the bleeding and that he did not used the word ripped or words to that effect.

She said when she asked him about why he removed her mother’s ovary he said: “Well at least she won’t get ovarian cancer.”

Ms Cruise also recalled visiting her mother after she was transferred to St Luke’s Hospital after suffering adverse effects from the operation.

“She was delirious. She thought we were Russian spies out to get her and that her catheter was a rope. It was surreal,” said Ms Cruise.

She also recalled a meeting with Mr Van Geene at St Luke’s Hospital, Kilkenny where he told her and her mother the post operation bleeding she suffered was because she had coughed during the operation.

She said Mr Van Geene told them that a ligature on her ovary burst because she was a smoker and had coughed violently.

Ms Cruise said Mr Van Geene became aggressive and verbally attacked her mother. She told the inquiry he said to her mother “I know where this is going, litigation”.

Ms Cruise said he leaned towards her mother and hit her repeatedly on the hands and said “sue me, sue me, sue me” and then started hitting her on the knees.

She said a nurse was also in the room at the time, but did not say or do anything while the incident occurred.

“Her reaction was to stand up against the wall. She did not know how to handle the situation,” she said.

Ms Cruise said her mother confronted Mr Van Geene about throwing her womb in a bucket and said the womb had carried her daughter for nine months.

Ms Cruise said Mr Van Geene said: “I didn’t know you were that sentimental about it.”

Ms Cruise said Mr Van Geene was agitated and that he has been up early that day and said; “I’m here 20 minutes and nobody is paying me to be here.”

She said the nurse called an end to the meeting as both parties were agitated.

Ms Cruise said she expected an apology and was shocked by the language and tone used by Mr Van Geene. “Instead of an apology my mother got a slap on the leg and was told she wanted money,” she said.

Ms Cruise said her mother had once been a very active woman, but her condition has caused her depression and severe pain.

Prof O’Sullivan said he seen a number of patients who experienced problems after surgery with Dr Van Geene and wrote to the Medical Council regarding two patients who had been in Dr Van Geene’s care.

The inquiry heard that Dr Van Geene carried out a hysterectomy on Patient A at Aut Even hospital in April 2009.

It is alleged the hysterectomy caused a fistula in Patient A’s vagina which led to persistent brown discharge from her bowel to leak into her vagina.

Prof Winters said, as a result of Dr Van Geene’s alleged mistreatment of Patient A, she had to have a colostomy procedure and a colonoscopy.

The inquiry resumes on Wednesday and will continue until Friday.