Getting HRT treatment is worth risk of cancer for some 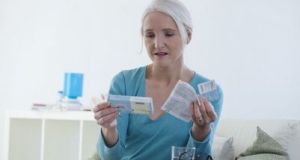 HRT is used to treat symptoms of the menopause such as hot flushes, mood changes and disrupted sleep. It increases the levels of female sex hormones that have reduced in menopause. File photograph: Getty Images

According to the latest research, hormone replacement therapy (HRT) can almost triple the risk of breast cancer. Researchers from the Institute of Cancer Research say the original risk of breast cancer from taking a combined preparation of the hormones oestrogen and progesterone had been underestimated.

HRT is used to treat symptoms of the menopause such as hot flushes, mood changes and disrupted sleep. It increases the levels of female sex hormones that have reduced in menopause.

Originally lauded for its role in preventing heart disease and osteoporosis in older women, HRTs reputation was severely dented by two major studies published in the early 2000s. The Women’s Health Initiative of 16,000 women in the US, who had been taking the combined version of HRT, found they were at increased risk of breast cancer, heart attacks, strokes and blood clots. The UK Million Women Study also showed HRT taken long-term caused cancer.

The latest study of 100,000 women found those who took the combined oestrogen and progestogen pill for about five years were 2.7 times more likely to develop breast cancer compared to those who took nothing or only the oestrogen pill. The risk rose to 3.3 times for women who took the drugs for 15 years or more.

Oestrogen HRT is suitable only for women who have had a hysterectomy.

Hormones can stimulate cancer growth, with those contained in combined HRT playing a role in ovarian and breast cancer. Oestrogen-only HRT increases the risk of cancer of the womb.

The one piece of good news is that once a woman stops taking HRT the risk of developing breast cancer begins to fall. HRT remains a reasonable short-term treatment option for menopausal symptoms. Your GP can help you make a personalised assessment of the risks and benefits of taking HRT.