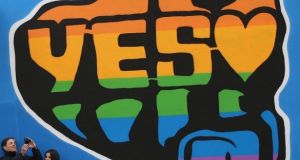 Concerns have been raised regarding finances in the Glen charity, which was involved in the marriage equality referendum campaign. File photograph: Niall Carson/PA

The Charities Regulatory Authority is to carry out a formal investigation into the Gay and Lesbian Equality Network (Glen), which has been at the centre of allegations of financial mismanagement.

The investigation will examine the administration, governance and financial management of Glen by the charity’s trustees. It will look at whether the charitable assets of the organisation have been used for charitable purposes and can be accounted for.

Glen is in the process of being wound up after its board decided it was no longer viable in the wake of controversy over its financial management.

The charity contacted the regulator last month after its then chief executive Aine Duggan, who has since left, raised concerns over financial and governance issues.

Glen provided supports worth €11,500 to its co-founder Kieran Rose when he stood unsuccessfully for the Seanad last year. The money was later reimbursed but the board had not been informed of the help provided.

Former senator Jillian van Turnhout compiled a report on the organisation which said Glen was caught in “a perfect storm” following the controversy, with diminishing public trust, minimal financial reserves, no chief executive and reduced staffing.

The decision by the regulator to investigate Glen was made after the authority examined documentation it ordered the charity to provide last month.

“Having received and examined these documents, and after examining additional documentation received from the charity, the authority has determined that a statutory investigation into Glen is warranted,” chief executive John Farrelly said.

The opening of an investigation was not in itself a finding of any wrongdoing, he added.

The authority said its policy was, in the public interest, to issue a statement whenever it appoints an inspector to carry out a statutory investigation into a charity, and to publish investigation reports on completion.