First Irish death over online pills may force a reckoning 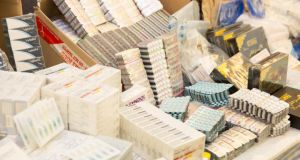 No internet pharmacy, whether legitimate or not in another country, can supply drugs to customers in Ireland. That hasn’t stopped the flow of medicines into Ireland from overseas merchants hawking their wares on the web.

Warnings about the dangers of purchasing medicines on the internet have become commonplace in recent years, but the first known Irish death of a person from consuming pills bought illegally online may finally force people to take heed.

The law, which predates the internet era, is clear: mail order of prescription-only medicines, including internet supply, is illegal.

That means no internet pharmacy, whether legitimate or not in another country, can supply drugs to customers in Ireland.

That hasn’t stopped the flow of medicines into Ireland from overseas merchants hawking their wares on the web.

It is impossible to know exactly how much use consumers are making of the internet to satisfy their drug requirements, but the rising level of seizures of counterfeit and illegal medicines seized is one indicator.

Last week, the Irish authorities put on display a sample of the 142,000 tablets and capsules they seized as part of an international operation over a single week in over 100 countries.

There are many strands, and many linked dangers, to the growing international trade in prescription medicines. Some Irish consumers have undoubtedly been driven online by the high cost of their prescription drugs at home.

Others seek unfettered access to medicines for which they would normally need a prescription. Still others want to procure products which are illegal in Ireland.

Taking any medicine without proper medical supervision is risky. Issues arise as to dosage, pre-existing conditions, combinations with other drugs and the availability of follow-up treatment.

The other main problem is the lack of quality control in relation to much of what is being sold online. Up to half of the medicines seized in Ireland have been found to be unreliable and potentially harmful.

Often, the medicine doesn’t actually include the claimed active ingredient or includes the wrong dosage. Products may be bulked up with harmful substances, or passed off as natural or herbal when they are anything but.

DNP (Dinitrophenol), the drug implicated in the death of a young man in mid-May, has been on the banned drug list for almost 80 years. Originally an industrial compound used in the manufacture of explosives, its potential for causing side-effects and even death have been known for some time.

The drug is often marketed to bodybuilders keen to lose fat and maximise a “ripped” or muscular appearance. Even in this milieu the dangers of DNP are well-known, yet a minority continues to use it, believing the advantage of massive fat loss outweighs these risks.

Some have paid for this belief with their life; worldwide, DNP has been linked to more than 60 deaths.

The authorities – the Garda Síochána, Revenue’s Customs & Excise service and the Health Products Regulatory Authority – have made arrests and closed down websites in pursuit of their investigations into the trade of illegal medicines.

International co-operation is increasing under the leadership of Interpol, so there is at least a chance the purveyors of deadly chemicals may be pursued. However, the international trade in drugs is not going to disappear any time soon.