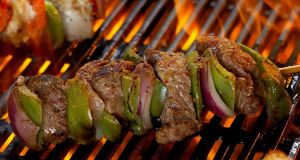 A senior fire officer has warned people they face an “invisible threat” when dealing with barbecues, especially in Summer months.

The warning was issued after a nurse’s head was engulfed in flames as she tended to a barbecue in Co Limerick.

Mother of five, Joanne McMahon, from Castlemahon, was attempting to relight a bain-marie with methylated spirits when it flared up and exploded in front of her. Her sister, Noelle Collum, from Knockaderry, who’s also a nurse, was also badly burned in the fireball, which happened at a niece’s confirmation party.

Three others, including a third sister, Mary Griffin from Ardagh, were treated in hospital for minor burns.

Ms Collum, who is PRO of the Knockaderry Camogie Club in West Limerick, was described by a club source as “very popular”.

The source, who did not want to be named, paid tribute to her colleague’s “good standing in the community... She’s a great local person and a great parish person. She’s heavily involved in the community.”

“Methylated spirits, for example, act as a fast burner,” he explained.

“Petrol or any other accelerants, including methylated spirits should not be used to speed up the [barbecue] process.

“These accelerants can take in air and accumulate it before they explode. Gas barbecues should not be used in enclosed spaces as gas is heavier than air and can accumulate at ground level.”

He added: “I would advise people to always read the manufacturer’s guidelines. It sounds crude but, most people don’t read the instructions.”

“Barbecues are fun but reasonable safety measures must take place prior to lighting and then suitably disposing them. They must also be completely extinguished before the site of the barbecue is abandoned. A lot of it is common sense.”

Mr Barrett warned that any type of fire, especially in summer months, can spread and cause maximum destruction within seconds of lighting. “There was an incident recently where we dealt with a house fire that was caused when hot ashes were put into a wheelie bin.

“The bin caught fire which spread to an oil tank which spread to a car beside the house. The car exploded into flames and set the house on fire. The family were lucky to get out [unharmed] because their fire alarm alerted them.”

He said barbecue coals, like ashes from open fires, should never be dumped in wheelie bins. “Barbecues should be regularly maintained for corrosion, and if they are gas-related, check for leaks or the condition of the hose pipe which can perish over time and cylinders can corrode and leak gas.”