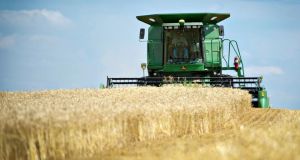 2014 was the fifth consecutive year that the agriculture sector recorded the highest number of workplace fatalities. Archive photograph: Daniel Acker/Bloomberg

Fatalities in the agriculture sector contributed to a 17 per cent increase in overall workplace fatalities last year despite a downward trend across most sectors, data released by the Health and Safety Authority shows.

The HSA figures show that 55 people were killed in work-related accidents in 2014, compared to 47 fatalities reported the previous year.

With the agriculture sector representing roughly 55 per cent of all work-related deaths in 2014, it was the fifth consecutive year that the sector recorded the highest number of fatalities.

“The number of fatal accidents that occurred on farms last year was the highest in over 20 years,” said Martin O’Halloran, CEO of the HSA

“In May of 2014 alone there were five people killed. It is particularly tragic that five children lost their lives on Irish farms last year,” he said.

Of the overall number of those killed, seven were categorised in the 0-17 age group of which four deaths resulted from incidents involving vehicles in the workplace.

“We are concerned at what is a significant increase in workplace fatalities and what is particularly alarming is that 54 per cent of fatalities involved vehicles in the workplace. This is up 13 per cent from the previous 5-year average for 2009 to 2013 of 41 per cent,” said Mr O’Halloran.

Despite the significant increase in agriculture-related deaths, 2014 saw reductions in fatalities in construction (from 11 down to 8), fishing (5 down to 1) and transportation and storage (4 down to 3).

Sectors that saw an increase in fatalities were manufacturing (from 1 up to 3) and the administrative and support services sectors (0 to 2).

The county with the highest number of fatalities during 2014 was Cork with nine workplace deaths reported. Dublin reported eight workplace-related fatalities in 2014 while Tipperary reported seven. The overwhelming majority (52) of those killed in the workplace were male.