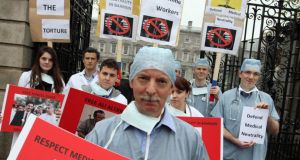 Concerns have been raised over a forthcoming inspection of the Royal College of Surgeons’ Bahrain-based university by the Irish Medical Council.

The visit could lead to accreditation of the university but a number of members of the Irish medical community, some of them former colleagues of people incarcerated by the ruling regime in Bahrain, fear inspectors will be given a sanitised view of conditions in the country. In 2011, following popular demonstrations, numerous doctors were arrested and allegedly tortured for coming to the aid of protesters. Some of these doctors had been trained by the RCSI in Ireland and in Bahrain.

At a protest outside the Dáil yesterday, Prof Damian McCormack of Temple Street Children’s Hospital in Dublin said it was crucial to keep attention focused on the Bahrain issue, particularly given the recent arrival of an official Bahraini government delegation to Ireland.

At a meeting on Wednesday, the delegation was asked to seek a royal pardon for Dr Ali Al Ekri who trained in Ireland and who is serving a five-year prison sentence. Criticising the regime’s zero tolerance approach to dissent, Prof McCormack said: “The protest is to show that in Ireland you can come to the front door of the Taoiseach’s office and protest without fear of arrest. The regime in Bahrain are so detached from reality that they will give you five years in jail if you insult the king on Twitter.”

Questions have been raised by some Irish doctors about the forthcoming IMC trip to the Medical University of Bahrain which was opened in 2003 and has more than 1,200 students. The inspection adheres to World Health Organisation standards.

The treatment of doctors since 2011, the militarisation of hospitals and sectarian tensions between the country’s majority Shia and Sunni communities are among the issues which have been raised by Irish critics.

Averil Power, Fianna Fáil Seanad spokeswoman on education, said: “Many of the doctors that were arrested and imprisoned trained in Ireland. They trained with the RCSI here in Dublin. They worked in Irish hospitals. Ali Al Ekri, who is still in prison, worked in Temple Street. “Silence is complicity. You cannot be silent in the face of torture. You cannot be neutral.

The IMC has already raised its concerns with the Government over Bahrain.

In a detailed statement yesterday, the RCSI said that it has, over the last three years, met senior government officials in Bahrain with whom it raised its own concerns. “RCSI also formally wrote to King Hamad to appeal for clemency [and to] drop all outstanding legal charges against all those who had been charged, including medical personnel,” it said.

It pointed out however that it was, and must remain, a health sciences institution with a focus on education, a role that allowed it to be “more effective” in its influence. “We are not a political advocacy organisation,” said the RCSI.