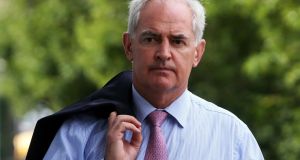 Dr Peter Boylan: In relation to vasectomies, he said doctors at St Vincent’s “haven’t been told they can’t do them”. Photograph: PA

Doctors at St Vincent’s hospital are free to carry out sterilisation procedures that are considered to be contrary to its Catholic ethos, according to the hospital.

Claims that the proposed move of the National Maternity Hospital (NMH) to the St Vincent’s campus would lead to ethical issues over services for pregnant women are a “red herring” and a “sideshow”, clinical director Prof Michael Keane told The Irish Times.

In relation to vasectomies, Prof Keane said doctors at St Vincent’s “haven’t been told they can’t do them” and the reason the procedure is not performed in the hospital is because is it a minor treatment normally performed in GP surgeries.

He admitted some staff may “assume” they should not be performing sterilisation procedures but described this as “a historical thing”. St Vincent’s is fully owned by the Religious Sisters of Charity.

A row over governance structures has delayed the lodging of a planning application for the €150 million project to build a new maternity hospital at St Vincent’s. The NMH wishes to retain a separate board and an obstetrician/master as chief executive. St Vincent’s wants both hospitals run by the same board, on which the NMH would have two seats.

Vasectomies and tubal ligations are performed at St Vincent’s on occasion, in circumstances where procedures are indicated for medical reasons, such as cancer, but they are not carried out electively for people who want to permanently prevent pregnancy.

Claiming the hospital’s position had been misrepresented, Prof Keane said St Vincent’s staff last year fitted 70 Mirena coils, a long-term contraceptive device. “To contend religious ethics are hanging over their heads when they’re putting in coils is a bit rich,” he said.

The NMH will be given more detailed assurances on ethical issues if required in advance of any move, he said. “Whatever they are providing at the moment, they can continue to do, be it IVF or sterilisation.”

St Vincent’s chairman Jimmy Menton was yesterday due to meet former High Court president Mr Justice Nicholas Kearns, who is expected to be elected chairman of the NMH this month, to see if a basis can be established to resume talks.

Mr Menton denied that St Vincent’s had agreed at the time the project was announced in 2013 that Holles Street could maintain separate governance structures.

“It was always going to be a single governance structure,” he said. “We never saw this as simply a land donation.”

He said the NMH’s name, brand and fundraising operations could remain. It could also continue to operate its own board after the transfer, though its functions would be limited to managing the Holles Street asset and to nominating two members to the St Vincent’s board.

The Mater hospital, which is owned by the Sisters of Mercy, said it does not carry out vasectomies or tubal ligations. In contrast, both procedures are available at many HSE-run hospitals, including Cavan, Wexford, Mullingar and Tullamore. Connolly and Loughlinstown hospitals perform vasectomies only, while the Coombe women’s hospital carries out tubal ligation.