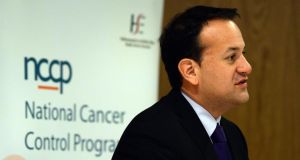 Minister for Health Leo Varadkar speaking at the launch of the NCCP cancer report ‘A Strategy for Cancer Control in Irland’. Photograph: Cyril Byrne

Ireland will see a doubling in the incidence of cancer by 2040, according to a new report published today.

The National Cancer Control Programme (NCCP) said while considerable progress had been made in the implementation of the many recommendations of the 2006 national cancer strategy, a number of priorities remained a work in progress.

Because of Ireland’s relatively young population and inevitable “boom’’ in the number of ageing people, Ireland would have the highest growth of cancer incidence in Europe, according to the report.

The report on the 2006 national cancer strategy was launched in Dublin by Minister for Health Leo Varadkar. He said cancer services had shown a marked improvement since it was initiated.

Mr Varadkar said the third national cancer strategy for 2016 to 2025 was now being developed and he would set up a steering group. “Now, almost eight years on, it is timely to review implementation undertaken to date, celebrate the successes and identify the gaps that remain,’’ he said.

Another challenge, according to the report, would be the “current financial climate leading to capacity constraints in beds, theatre and ICU [/Intensive Care Unit/] and uncertainty regarding the availability of development funding at a time of rising incidence and prevalence of cancer’’.

Drug costs and related laboratory testing were predicted to rise sharply in the coming years, the report said.

The strategy provided a clear vision and focus for change, the report said. Strong political, policy and HSE (Health Service Executive) support, combined with effective clinical leadership across disciplines and tumour-site specific diseases were, and remained, essential, it said.

It said 2,870 men attended the eight NCCP rapid access prostate clinics in 2013. Of these, 1,591 were offered an appointment within 20 working days and, on average, 36 per cent of those who attended were subsequently diagnosed with cancer.

Access to clinics continued to be an issue, with just 55 per cent of patients who were referred seen within the target time, it said. The situation had deteriorated further in the first half of last year, it said.

The report said Galway, Limerick and Waterford hospitals had continuously struggled to reach their targets, with a contributory factor to the delays a lack of consultant urologist posts locally.

Since January last year targets were not being met in some Dublin centres because of cancellation of clinics over holiday periods and staffing challenges, the report said. There was a commitment to provide additional consultant urologist posts, the report said.