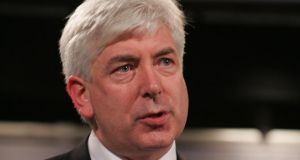 Minister with responsibility for primary health care Alex White has said: “The commitment in the programme for government to achieve free GP access for the entire population within the term of office of this Government will be achieved.” Photograph: Brenda Fitzsimons/The Irish Times

Parents will be able to access free GP care for their children aged under five “sometime in the middle of next year”, the Minister with responsibility for primary health care Alex White has said.

The measure, which will cost €37 million in a full year, is currently going through the Oireachtas, but no consultations have yet taken place with doctors, Mr White revealed this morning.

He acknowledged that “people are entitled to be sceptical” in relation to the implementation of the Government’s commitment to deliver free GP care for the whole population by the end of its term in the spring of 2016.

However, he said there was not a healthcare system in the world that will be able to sustain itself unless the emphasis is put on primary care. “We can’t do that with the barriers of fees.

“We’re one of the few countries in the OECD that charges people to go and see their doctor.”

When pressed by Sean O’Rourke on RTÉ Radio One’s Today with Sean Rourke show as to the start date for free GP care, Mr White responded: “The commitment in the programme for government to achieve free GP access for the entire population within the term of office of this Government will be achieved.

“For me this is core. We will not be able to sustain our health services in the future unless we do this.”

Minister for Health Dr James Reilly declined to make a cast-iron commitment to the introduction of free GP care by 2016 when he was interviewed by RTÉ presenter Brian Dowling.

Mr White said they had not opened discussions with GPs about the implementation of free care for the under-5s, but he was confident of success. “We will talk to the doctors about this. I’m sure we will have the co-operation of the doctors in this.

“It is not a question of giving any section of society a veto over Government policy. We can’t do this on our own. We need the co-operation of the medical profession and I think we’ll get it.”

Mr White said he was not personally persuaded by the idea that the State could not introduce a ban on alcohol sponsorship of sporting events because it might stop Ireland getting the Rugby World Cup in 2023.

When asked whether he was in favour of the return of the “holy hour” where the pubs had to close in the afternoon, he responded: “There was a time in the past when you think those type of rules are overly constraining. Personally, I don’t think there was such a bad idea.”

However, they were not in the package of measures to deal with alcohol as a public health issue, as distinct from a public order issue, for the first time.

1 Irish Times poll: Large majority want change of government
2 Taoiseach claims Sinn Féin not ‘a normal political party’
3 Yacht captain guilty of drunk sailing had ‘God given right’ to be on Liffey
4 Miriam Lord: Greens take to the beach as signs emerge of a rising tide
5 Scientist says methane from farming should be treated differently to CO2
Real news has value SUBSCRIBE