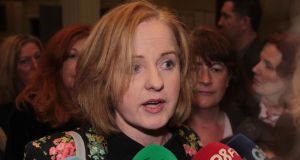 The guidelines ‘highlight the problems with the legislation’ which ‘forces a woman to run a gauntlet of doctors and bureaucracy to access an abortion’, Socialist Party TD Ruth Coppinger said. Photograph: Niall Carson/PA Wire

They were reacting to a report in The Irish Times today that guidelines on implementing the Protection of Life During Pregnancy Act for the circumstances in which a woman may legally have an abortion have been circulated to some health professionals.

The guidelines “highlight the problems with the legislation” which “forces a woman to run a gauntlet of doctors and bureaucracy to access an abortion”, Socialist Party TD Ruth Coppinger said in a statement.

It was “totally unacceptable” that a suicidal woman would be left waiting for referrals due to both the time sensitivity and the risks for abuse by doctors with a conscientious objection, she said.

The guidelines would do “nothing to help women who want to have an abortion in Ireland” and would still be forced to travel to access “what should be feely available at home”. Women with mental and physical health concerns “should not have to deal with these extra pressures, she added.

She called for the 8th Amendment (on the right to life of the unborn) to be repealed to “ make abortion free, safe and legal in Ireland. ”

The Pro Life Campaign accused the Government of misleading the public “every step of the way” on abortion. Assurances sought by some Fine Gael TDs in advance of the passage of the the legislation are “shown to be worthless”, campaign deputy chairwoman Cora Sherlock said in a statement.

The Protection of Life During Pregnancy Act passed last July and was introduced in January. Ms Sherlock said it was “presented as emergency legislation needed to save women’s lives.”. However if this were true it would not have taken a year to draw up the guidelines, she said..

The legislation was “never about life-saving treatments” and “was always about Fine Gael capitulating to the Labour Party,” she said.

Ms Sherlock says the guidelines meant all that is required for an abortion is “two like-minded psychiatrists to sanction the abortion without having to produce a shred of medical evidence that it would help save the life of the mother.” She said abortion was “legal up to birth” based on the threat of suicide.

The new guidelines outline procedures to be adhered to by clinicians when there is a real threat to a pregnant woman’s life that can only be averted by a termination. The threat can be physical, a physical emergency or by suicide.

The guidelines says termination is legal when there is suicidal intent where three doctors have examined the woman and jointly certified in good faith that there was a real and substantial risk of loss if her life which can only be averted by an termination of pregnancy and with regard for the need to preserve unborn life.