A third of adults across world now overweight or obese 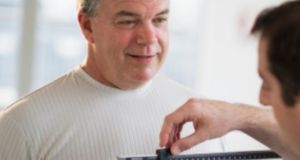 Research found that North America has the highest percentage of overweight adults, but regions such as Australasia and southern Latin America are catching up. Photograph: Getty

More than a third of all adults across the world are overweight or obese, a report from a British think-tank has revealed, leading to calls for governments to do more to tackle the growing crisis.

The Overseas Development Institute (ODI) said that the number of people affected in the developing world almost quadrupled between 1980 and 2008 to nearly one billion.

In the UK some 64 per cent of adults are overweight or obese, classed as having a body mass index greater than 25.

The ODI warned of a huge increase in health-related problems such as heart attacks, strokes, cancers and diabetes.

It suggested that changing diets and over-consumption of food linked to increased prosperity in the developing world was largely behind the change.

As incomes increase, diets are shifting from cereals and grains to a greater consumption of meats, fats and sugars.

The ODI’s Future Diets report found that globally, the percentage of adults who were overweight or obese grew from 23 per cent to 34 per cent between 1980 and 2008.

Some 904 million people in developing countries were classed as overweight or obese in 2008, almost four times the 250 million in 1980.

By contrast, the number of people who were overweight or obese in high-income countries increased by 1.7 times over the same period.

At the same time, under-nourishment is still a problem for hundreds of millions of people.

“The over-consumption of food, coupled with lives that are increasingly sedentary, is producing large numbers of people who are overweight and obese - primarily in high-income countries, but also in emerging middle-income countries,” the report said.

“Indeed, the world has seen an explosion in overweight and obesity in the past 30 years.”

This revealed that North Africa, the Middle East and Latin America saw overweight and obesity rates increase to a level similar to Europe, around 58 per cent.

At 70 per cent, North America still has the highest percentage of overweight adults, but regions such as Australasia and southern Latin America are catching up, with 63 per cent.

Report author Dr Steve Wiggins said that those with higher incomes had greater ability to choose the foods they want, the BBC said, while changes in lifestyle, increased availability of processed foods and influences such as advertising and media have led to dietary changes, particularly in emerging economies.

The report said: “The evidence is well-established: obesity, together with excessive consumption of fat and salt, is linked to the rising global incidence of non-communicable diseases including some cancers, diabetes, heart disease and strokes.

“What has changed is that the majority of people who are overweight or obese today can be found in the developing, rather than the developed, world.”

The ODI said there was “little will” among the public and leaders to take action to influence future diets, “but that may change in the face of serious health implications”.

And it highlighted the “paradox of public policy”, saying: “In general, there is little appetite amongst politicians or the public in high-income countries to take strong measures to influence future diets.

“Politicians are fearful of meddling with diets, and alienating farming and food-industry interests. It seems that this reflects public opinion, with many people seeing food choices as a matter of personal freedom.

“Most people hate to see regulation of the access to favoured foods, see taxation of unhealthy foods and ingredients as onerous and unfair, and acquiesce only in response to public information and education.

“Couple this with lobbying from food industries, and the political will to affect diets withers.”

The report gave the example of South Korea as having made concerted efforts to preserve healthy elements of the country’s traditional diet, via public campaigns and education, providing large-scale training for women in preparing healthy, traditional food.

Vaccine target to fall short by 25,000 this week, HSE says